Getting in an Uber on Friday night the driver turns to us and frowns "You sure you entered the right address?" I smile and shrug, "Yeah, we're heading to Yeoville."

As we drive down Rockey Street the car vibrates with the sounds of the weekend: buildings pulsate in base tones, bars spill out onto the street and people spill out onto passing cars. It's an overcrowded melting pot of cultures and languages: musicians, artists, drug dealers, hustlers, men in 3-piece suits because 'why not?' and a whole lot of people just trying to make a living...You'll struggle to find a place in Johannesburg that'll make you feel as claustrophobic or as alive.

The Uber stops at number 24, a building housing a jumble of hairdressers, spaza shops, takeaways, pawn shops and, somewhere amongst it all, The Yeoville Dinner Club. We get out and ask where Sanza's place is and someone shouts "Upstairs". Sanza leans over his balcony wearing a loud cap and a grin that stretches from ear to ear, he hollas "Here, my darlings." He walks down the stairs to meet us, shakes my hand and says, "You must be Katie."

The Dinner club is set in a single room - an office space that Sanza has lovingly curated into a storybook of African memorabilia: art, trinkets, crockery, records, cd's, teapots, espresso makers and cookbooks from around the world. In the centre is a long table set with mismatched cutlery and crockery, enamel mugs and enormous platters that will soon be intoxicatingly-full of Pan-African delicacies. 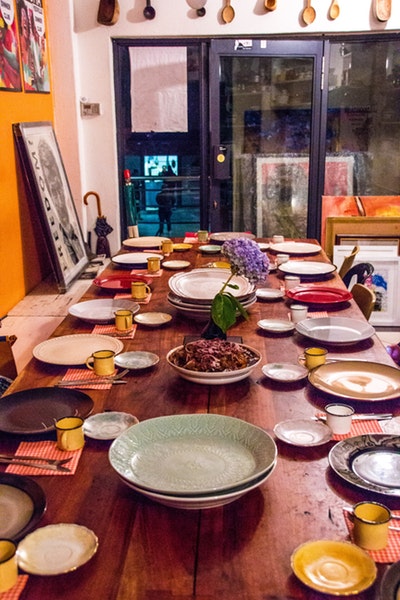 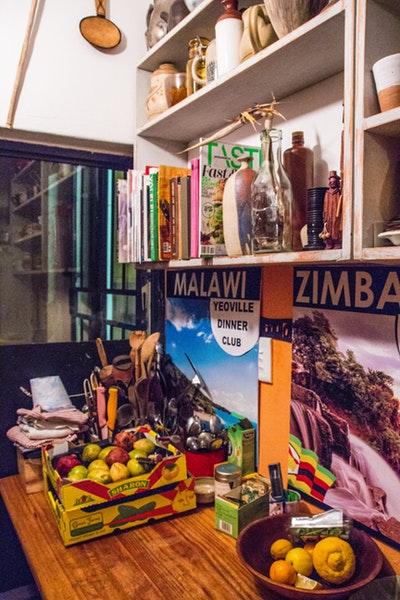 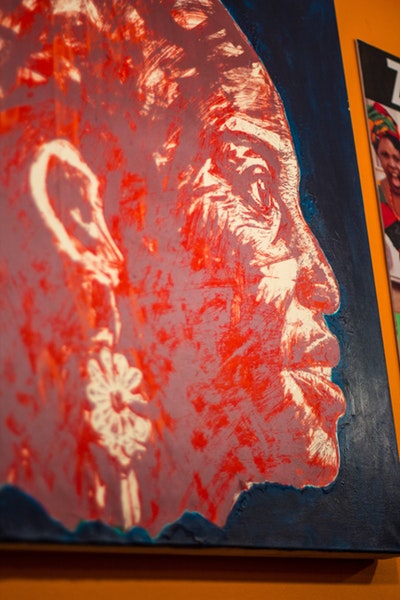 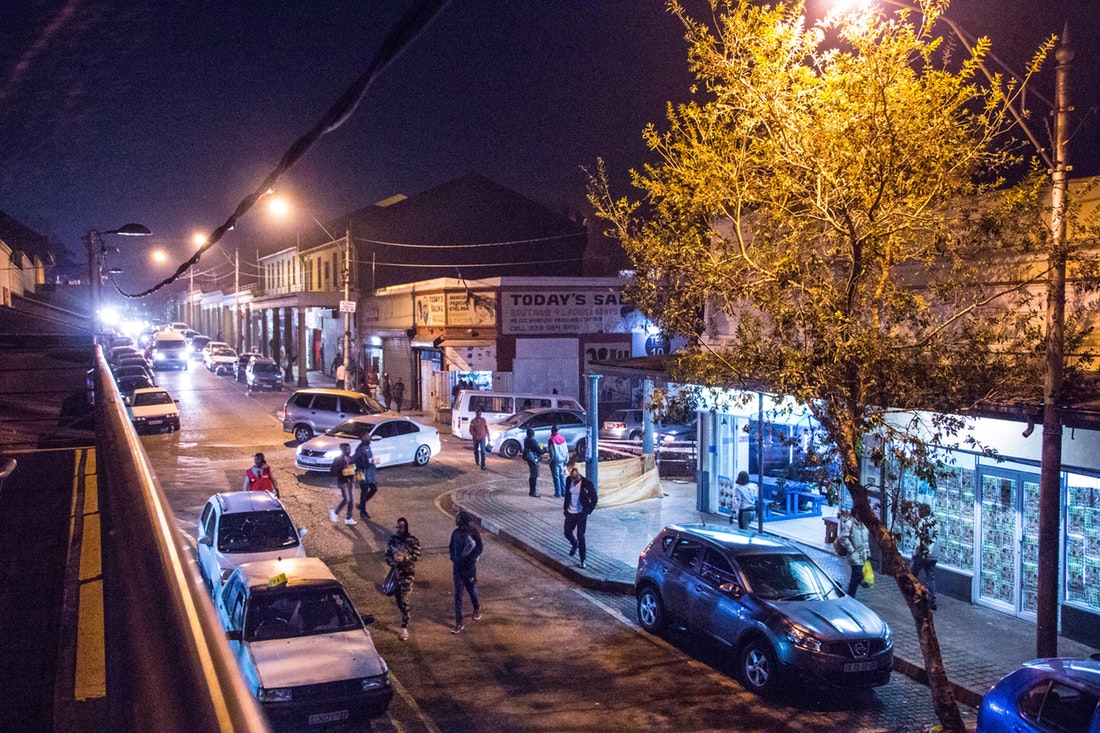 We move around the room introducing ourselves to the 12 strangers we'll soon call friends. Sanza ensures we all have a drink in hand, moves us to the balcony to soak up the street-scene below and busies himself with the final dinner prep. He calls us to the table and then rearranges us: splitting up the couples and the groups. Once happy with his configuration he opens his arms and declares "We've all been out of our comfort zones, getting into spaces like this where we all need to love each other, where we all need to get to know each other and remember each other's names, because this is a memorable event."

And so his story begins.

Sanza Sandile was born in Swaziland and grew up in Soweto. After matriculating he went to university in Joburg and found a place to stay in Yeoville. It was the 90's and the suburb was populated by artists, activists and journalists living it up in Joburg's party-central; he laughs as he recalls people warning him against it, "The more people say a place is unsafe, the more you know there's something nice there...the more you know it's the place you should be."

Sanza got his first job working in the nut section of a health shop selling macadamias to Jewish grannies. Evenings were spent exploring restaurants and bars; he tasted thin-crust pizza for the first time at Mama's, ate falafels at Ba-Pita and learnt the ceremony of Ethiopian coffee...He points to his walls and tells us, "All these things I've collected, these are all the stories of me growing up in Yeoville 20 years ago."

In the late 90's and early 2000's Yeoville became a predominantly black suburb and an influx of migrants from across the continent turned it into a multicultural hub, Sanza smiles, "The African migrants brought troubles, but they also brought great food...Yeoville is a Pan-African suburb, it's overcrowded and it's got trouble, but the food - it's African excellence."

Sanza endeavoured to taste everything; taking note of his favourite dishes and then experimenting with them over the years, tweaking the recipes and making them his own, ""The idea is to borrow from each other and this table is about what's possible - every dish is influenced by a different country." 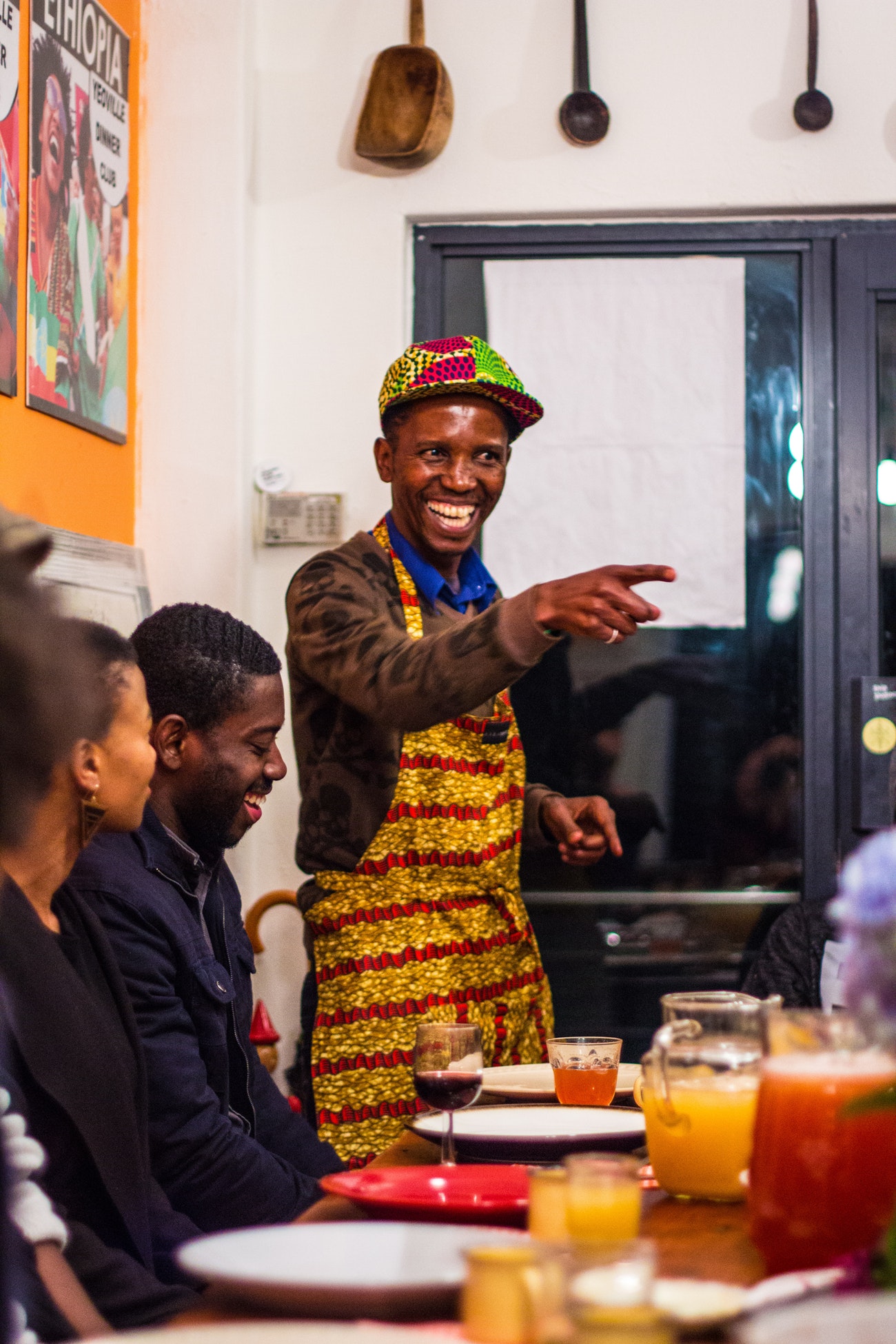 With that he uncovers the platters: Pan-fried Tilapia from Mozambique, Saka-Madesu (cassava leaves, ground nuts, black-eyed peas and kidney beans), Egusi (pumpkin seeds and leaves with roasted pumpkin and peppers), an Ottolenghi-style slaw, a mango and aubergine atchar, beef leg with caramelised onion, a Ghanaian-style jollof rice, Congolese-style dongo dongo (okra prepared with tomatoes and spices) and magwenya to soak it all up. We don't waste a moment, serving spoons clack and bowls dance around the table, we pass bread, we laugh, we drink, but mostly we just eat and eat and eat...I look up at Sanza and say "This is incredible." He smiles, "For me it's nothing, it's just my food and my passion for my people and my neighbourhood."

As we get our greedy on, Sanza regales us with stories of the icons who've sat in each of our chairs: Hugh Masekela, Antonio Banderas, Damian Marley and, of course, the late Anthony Bourdain (the man who put Sanza on the world's culinary map). Having died that very day, it's a difficult night for Sanza, but he chooses to celebrate Bourdain's life rather than mourn his loss. Sanza dedicates the dinner to Bourdain and we all toast his memory.

A friend of Sanza's, Blakka, knocks on the door and Sanza welcomes him in. He sits down next me and within seconds we're waxing lyrical about theatre, art and music...sharing laughter, swapping seats and stories and engaging in the kind of dinner conversation that nourishes the soul. The thing about Sanza's dinner club is that it attracts like-minded people, people interested in our country's complex history and its magnificent stories. People willing to go out of their comfort zones to meet new and interesting individuals, to sit around a table together and endeavour to write new narratives.

The Yeoville Dinner Club is one of the best Joburg experiences I've ever had. 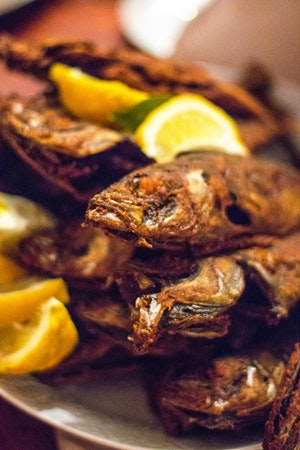 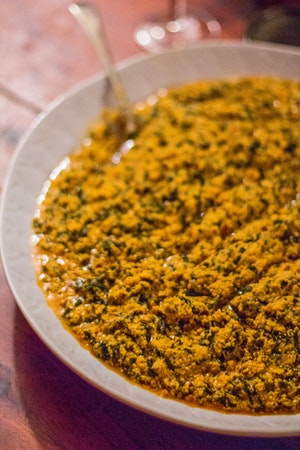 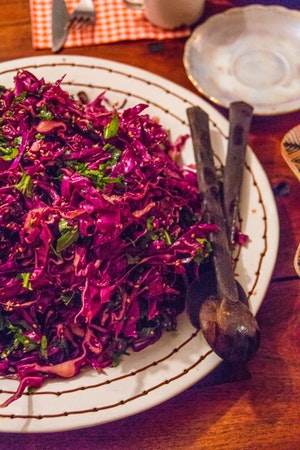 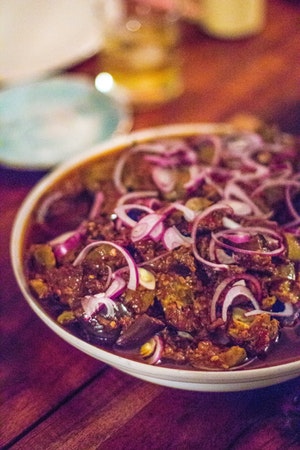