A Tale of Three Joburg Pools

For eight months out of twelve, it’s summer in Johannesburg.

Thanks to its high altitude, this African city is rarely hot: Even at its hottest Johannesburg never reaches the sticky, suffocating summer heat I grew up with on the American East Coast.

But from September to April, on most Joburg days, the temperature creeps high enough for a dip in the pool. At the very least the highveld sun provides enough warmth for lounging poolside.

Pool culture is strong in Joburg. Many families have pools in their own back gardens; those who don’t flock to one of the city’s public pools. Many of Joburg’s public pools have been around for decades – some for well over half a century – and have maintained their unique identities through the last 25 years of tumultuous political and social change.

As part of a group art project, I’m currently in the midst of an informal tour of Joburg public pools. The three pools I’ve visited so far paint an interesting picture of Joburg’s cultural diversity.

It’s a Saturday afternoon in mid-September. It’s technically not even spring yet according to the calendar, but summer weather has arrived in Joburg.

A Zoo Lake car guard directs my hatchback onto the grass across the street from the pool entrance. All the pavement spots are full.

“Glamorous” seems like a strange word to describe a community pool entrance, but that’s exactly what it is.

I pay the R9 admission fee to the lady in the window and head straight to the grassy embankment next to the pool.

“Are you also getting harassed by ants?” asks the bikini-clad young woman next to me, squirming on her towel. I look down at my legs, crawling with the tiny, harmless insects. I ignore the ants until they start to invade my camera bag, then surrender and move to the wide concrete steps closer to the pool. The steps are surprisingly comfortable to recline on, but next time I’ll bring a lawn chair.

The pool is large, 25 metres square. Only a smattering of the pool’s visitors are in the water. I strip down to my own bikini and walk brazenly to the deep end, diving in headfirst.

The freezing water answers the question of why most people are lounging rather than swimming. I manage about 90 seconds in the pool before climbing out, shivering.

I bump into some friends, an expat couple from Illovo looking to kill a few hours between social engagements. Young men posture for one another and jostle to be photographed. A young couple hangs in the shallow end with their shy toddler, who is smeared with white sunblock and wears air-inflated water wings.

Once I dry off, the temperature is perfect. My friends and I chat on the cement steps until the sun is just above the tree line, sending sparkles across the water.

Children pass to and fro in front of us – some in bathing costumes, some in t-shirts and shorts, and one little girl in a flowing white gown and heeled sandals. Straight from a birthday party, perhaps?

I don’t want to leave. 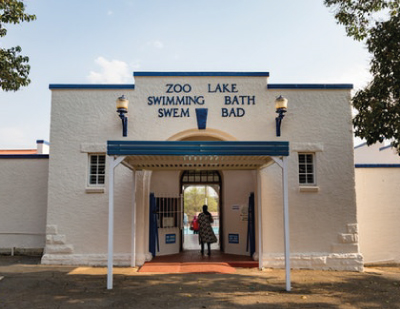 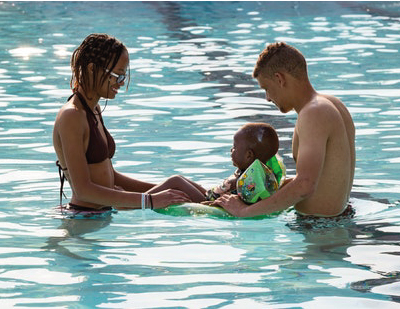 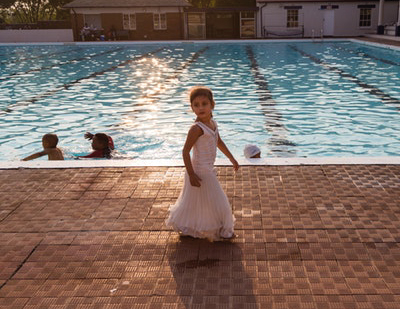 It’s late September and raining. I sit in my car, waiting for a pause in the downpour. When the rain eases I dash to the entrance, pay my admission, and quickly cross the grassy lawn to the pool hall.

The Linden pool is one of Joburg’s few indoor pools, heated and open year-round. This isn’t like the indoor pools I attended in the Northern Hemisphere though, with solid walls and warm air inside. “Enclosed” might be a better word than “indoor” to describe the Linden pool.

The pool is bordered by low, cinderblock walls on the sides and soaring glass windows on each end, with a ribbed metal roof arching over the top. I’d never imagined that an indoor pool could be beautiful.

This is the first pool I’ve ever seen that is handicapped-accessible. In one corner there is a plastic chair attached to a metal pole, which can raise a person sitting in the chair into and out of the water.

I’m not dressed to swim today; the air feels far too cold for me. But my friend Alex says the water is warm, and clearly it must be. Despite the forbidding weather the pool is full – kids splashing in the shallow play area, and groups of serious young adults in rubber caps gliding swiftly up and down the lap lanes.

There are gaps between the walls and roof of the Linden pool enclosure. The driving rain finds its way inside, as it batters the metal above us like a herd of galloping zebras. The noise is deafening. Lightning flashes, thunder claps, and the lifeguard clears the pool. The glass windows fog up with the breath of 40 waiting swimmers.

Soon the storm passes and everyone hops back in.

I walk halfway down the length of the pool and climb the bleachers, where I discover the roof creates an interesting optical illusion. The metal ribs seem to spread and fan outward as they get closer to me. The fluorescent lights affixed to the ceiling cast a glow that skims the metal ribs just so. It’s like looking up at a rising phoenix.

The rain stops and I walk outside, peering in through the glass. Shooting pictures of the pool from the outside in creates images that look like double-exposures – palm tree reflections super-imposed over teenage boys leaping into the water from the starting blocks. 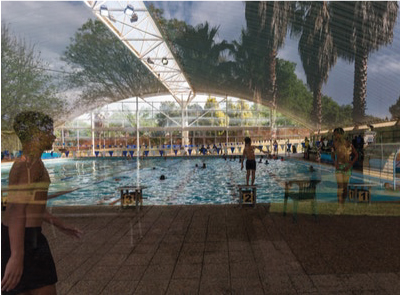 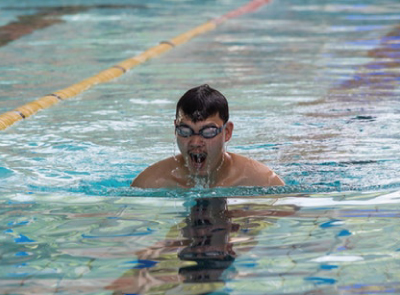 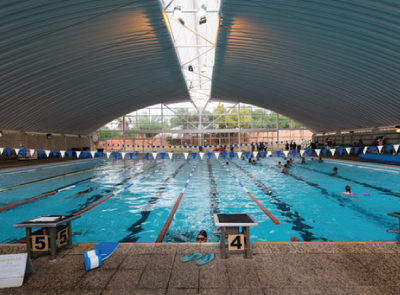 Melville, my home suburb, used to have a huge, stately pool along the lines of Zoo Lake’s. But a private developer purchased the property many years ago, and bulldozed the pool to build a shopping centre.

Many Melvillites don’t realize the suburb still has a public pool.

Beneath the hated shopping centre, in the basement-level parking garage, is a small sign reading “Melville Swimming Pool”. The new pool, tucked in a corner between the centre and the garage, is nothing like its beautiful old predecessor. But it’s a pool nonetheless.

Although it’s privately owned by the shopping centre and hence has a slightly higher admission fee than most Joburg pools (R12), the smaller Melville pool is open to everyone.

I arrive with my friends on a hot Sunday afternoon in March. The pool is probably half the size of the old Melville pool, according to the historic photos I’ve seen.

The water is full of noisy kids – a church group from Noordgesig, a suburb of Soweto that’s a good 20-minute drive from Melville. One of the leaders tells us the group comes here often because the Noordgesig pool is too crowded. The Melville pool, on the other hand, is usually empty. “It’s like having a private pool all to ourselves.”

I settle under a tree. A tiny girl in a swimming cap lies flat in the middle of the circular kiddie pool as her brother scampers around her. A group of Noordgesig kids crowds around my friend Fiver. Fiver is making quick drawings of the kids in her sketchbook.

There’s nothing fancy at this pool – no grand architecture or slick design, and just a small patch of grass to sit on with a couple of trees. But the best thing about the Melville pool is the unlikely view.

I gaze over the pool’s fence at the rocky, primordial hills of the Melville Koppies Nature Reserve. The Melville Koppies house scores of indigenous plant and animal species, providing a rare glimpse of what Johannesburg looked like before the gold rush started 130 years ago.

If I look straight over the fence and the light poles, block out the chattering kids, and avoid the view of the parking garage to my right, I can almost imagine I’m in the Namibian wilderness.

It’s getting the late and the church group leaders begin to round up their charges. Kids troop into the changing rooms in bathing costumes and emerge a few minutes later in damp street clothes.

Eventually they all file through the metal gate, into the parking garage, and disappear. The pool is empty now, so we leave. 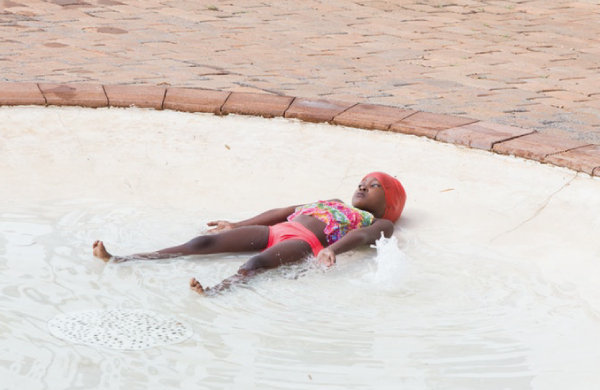 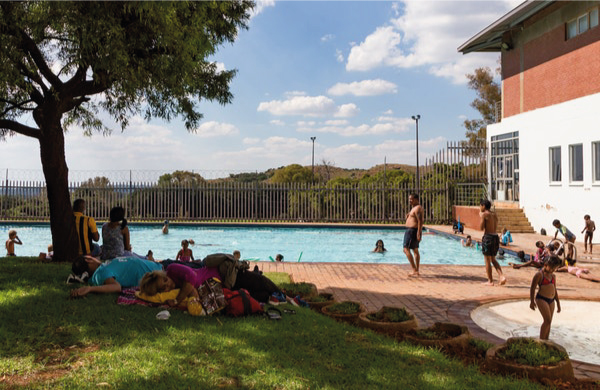 Words and images by: Heather Mason
of 2Summers blog