why climb when you can run...

4:15am... One of the super keen trail runners flushes the toilet and wakes everyone up. It's been 4 months of training and building excitement for these city slicker, road running, trail newbies and so although there is a nervous tension in the group there is that pre-run urgency in the legs to get moving.

The night before the run, the runners had arrived at Giant's View Estate, the hosts of this small party of explorers, and had indulged in the customary spaghetti bolognaise and the not so customary few bottles of wine. Although the run promised to be epic, everyone still was keen to have a good time on and off the mountain passes.

We had an hour's trip to get to the start and the weather promised to add an additional epicness to the run so we started as early as we could, leaving promptly at 5am. 100% chance of predicted thunder storms and heavy rain. Plus, the local livestock were getting moving early, slowing our approach to the start.

The Northern Drakensberg in Kwa-Zulu Natal, South Africa, is known to have severe storms and many hikers have lost their lives on the escarpment. As trail leader and photographer I had also only run the pass once before, 15 years earlier, and so I was nervous taking these newbies onto the slopes, miles from help, with extreme weather expected. 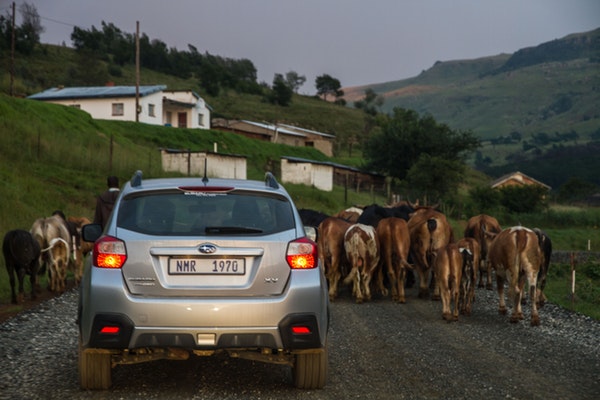 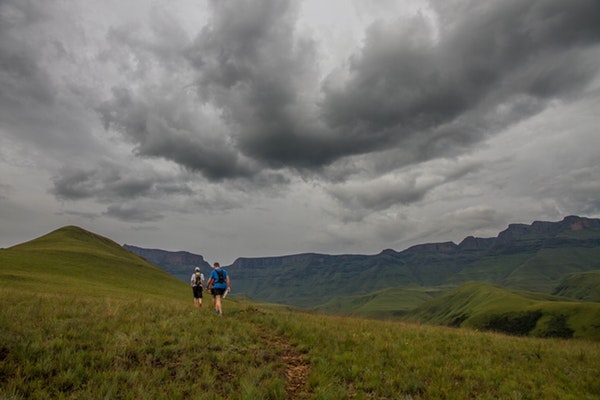 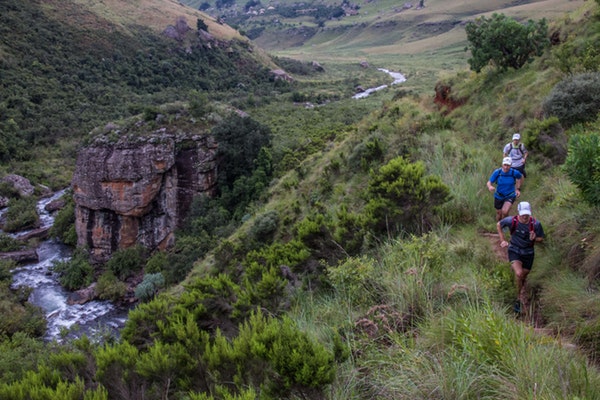 Running the Giant were two quality campaigners for change in South Africa. Adrian (Adun) 60 years old, and Andy (growth hacker for Different Life). Together, these two have raised funds and helped change the landscape of philanthropy in South Africa by working with Different.org. This day was a test of their mettle and getting them ready for their next big fundraising challenge.

Starting at a very chilled 1728m elevation, the air was heavy and thick with oxygen. For road runners there is an urgency to get the legs moving at a good 5-6min/km and the beginning trails were paved and easy to run. Heart rates were up and legs were pumping. To get the odd photograph I had to put in some serious intervals to stay ahead of the group, but experience told me this wouldn't last for long.

Although the run only promised to be about 30km, there was a serious climb ahead, in fact one of the hardest mountain passes in the Drakensburg. We were about to run up Giants Castle. Giants Ridge turns into Giants Pass and then the run up to the peak of Giants Castle at 3315m. 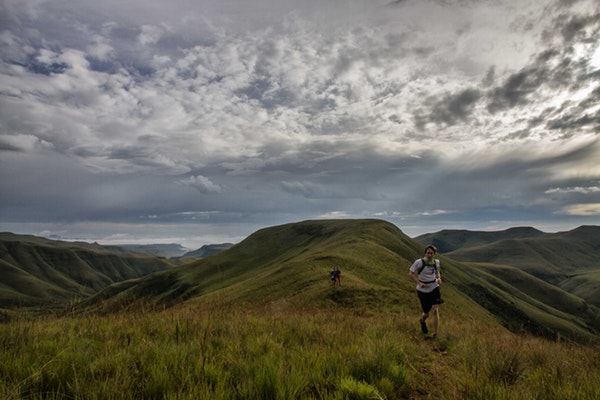 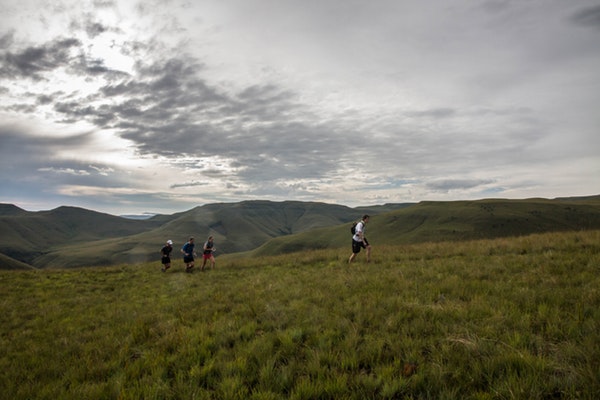 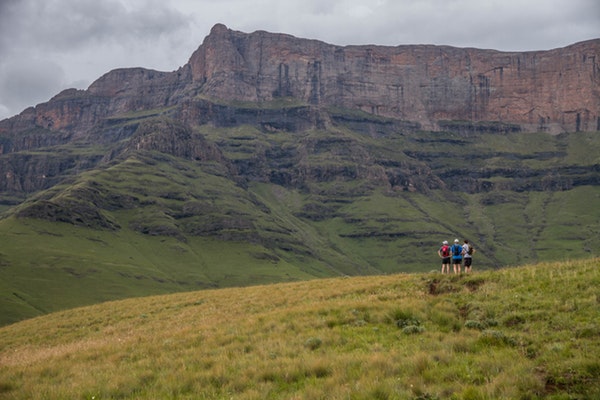 The run starts with a nice little climb up onto the ridge. Still trying to run as much as they could, the group got lost a few times and had to double back as their trail 'leader', coming up the rear, had to shout for them to come back. One of the challenges taking pics of the excursion was the tension between running ahead and staying behind. Intervals were the training experience of the day.

Surprisingly the runners kept a good pace, running everything that didn't have a huge ascent. As we hit the ridge a couple of the more energetic runners set off for a quick stretch of the legs, sending the local Eland scattering. Eland are the biggest antelope species, a male weighing in at over a ton and their surprise is genuine. Although a natural heritage site, the Drakensberg gets relatively few visitors in relation to the amazing resource it is. Other than near the camp we did not see another human, except at the top of the pass. 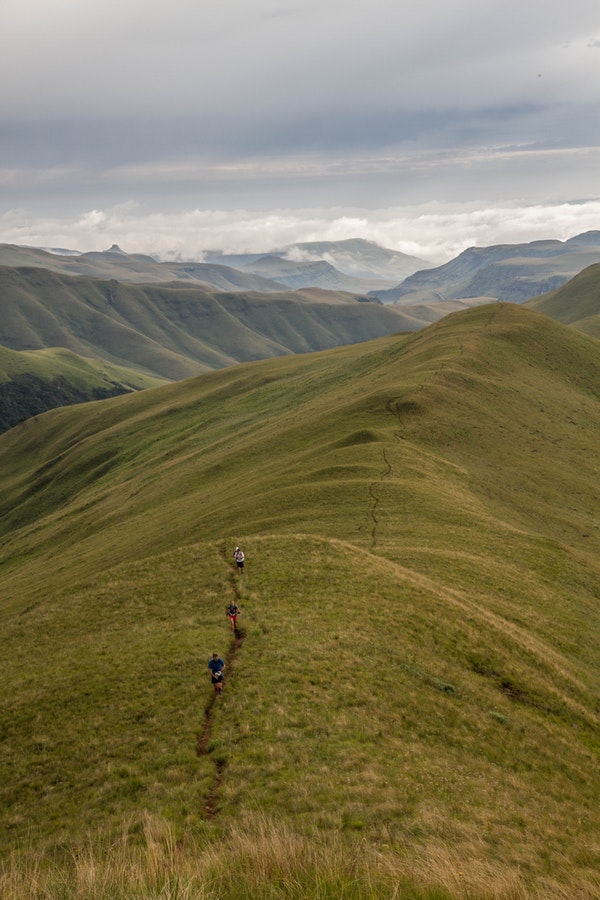 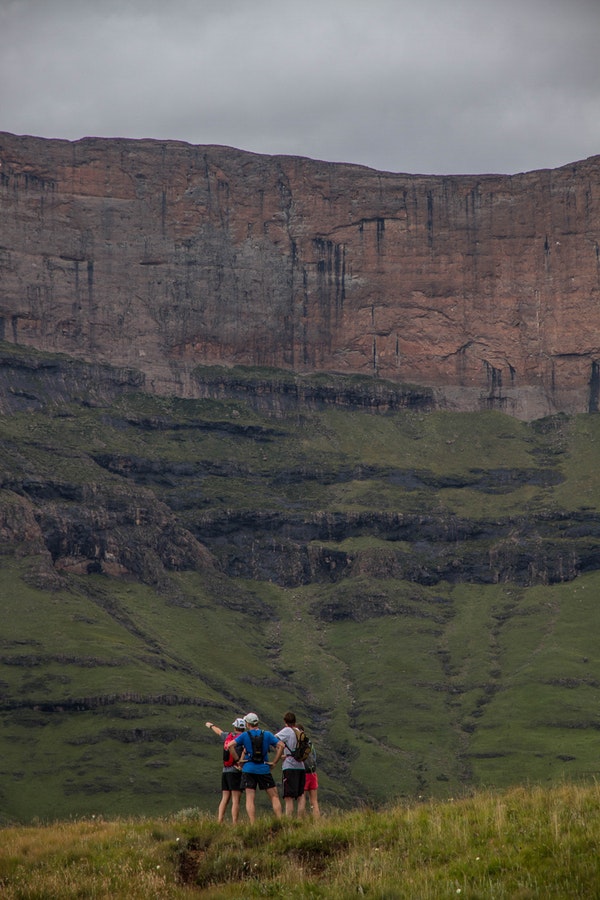 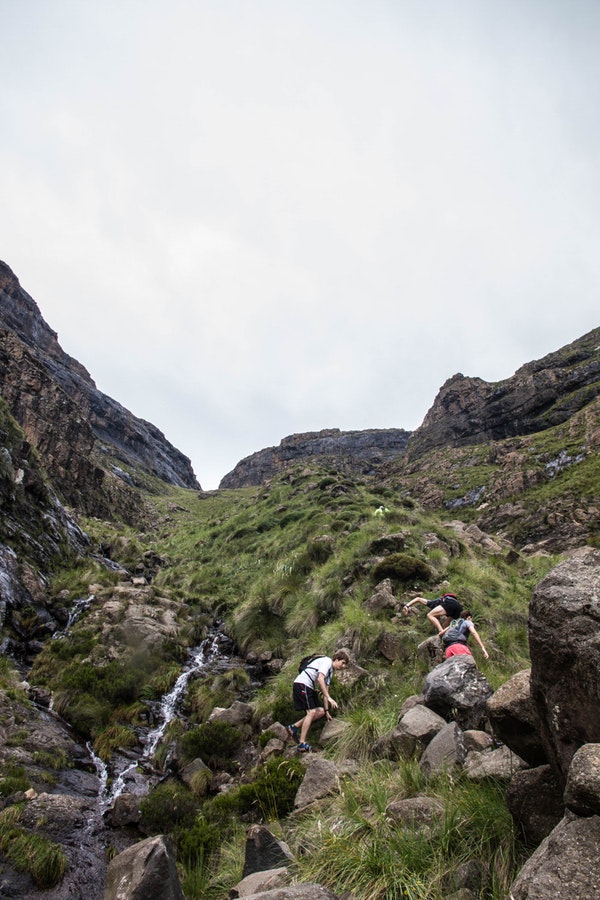 The ridge runs to a nice contour path where the team recharged with a quick break before setting off again. A few kilometers later the path turns upward to the pass. The running stopped. The climb is about 500m up and only 1.5km long. I had estimated that it would take us 30min to get up but it took far longer. The last kilometer up the slope took nearly an hour.

The path also quickly disappears as it is very rarely used. The result is a scramble up the slope, with some more adventurous runners going solo and trying to find their own route 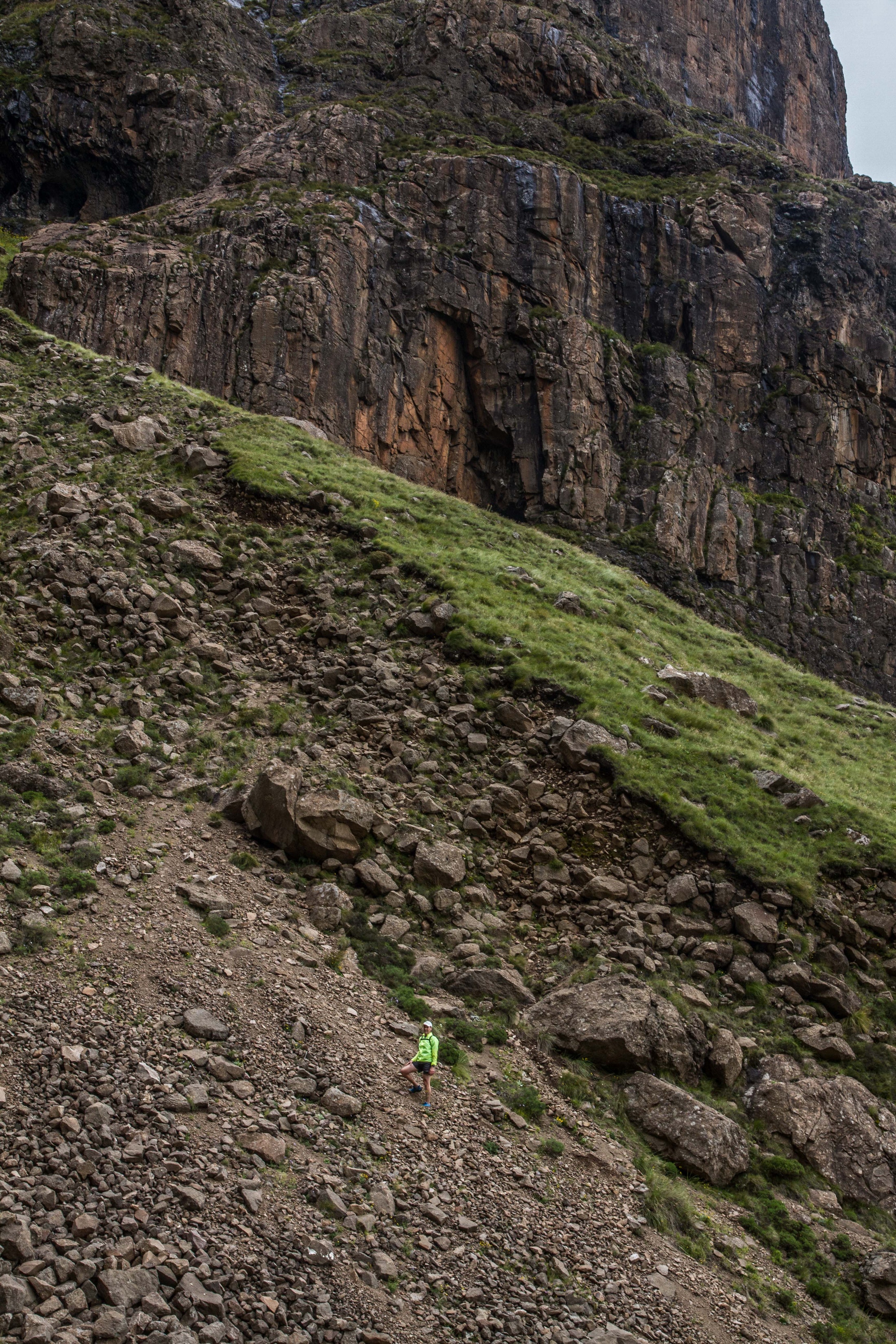 As we ascended the weather started to close in. The weather had been cold but it quickly became freezing. The pass acts as a natural wind tunnel and as the wind picked up it buffered the team making the climb even harder as the air rushed past us. Then the rain started.

A year earlier I had done the ridge as a small excursion. In that trip the clouds had been high and in a couple of minutes had dropped and rushed over the escarpment, literally smashing us with a foot of hail and flash flood amounts of rain. I imagined the scene of the team being stranded on the side of a mountain and being washed away by a flash flood, a real instance of this happening a few years earlier killing a few hikers.

We were too high at this point to turn back and so the best thing we could do was 'rush' to the top. As we ascended the weather miraculously lifted and we were left with beautiful views of the little Berg and the Midlands. 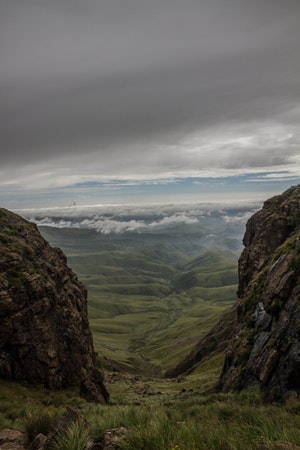 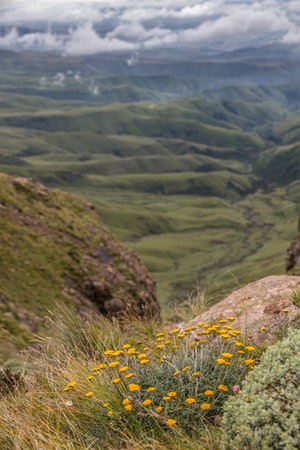 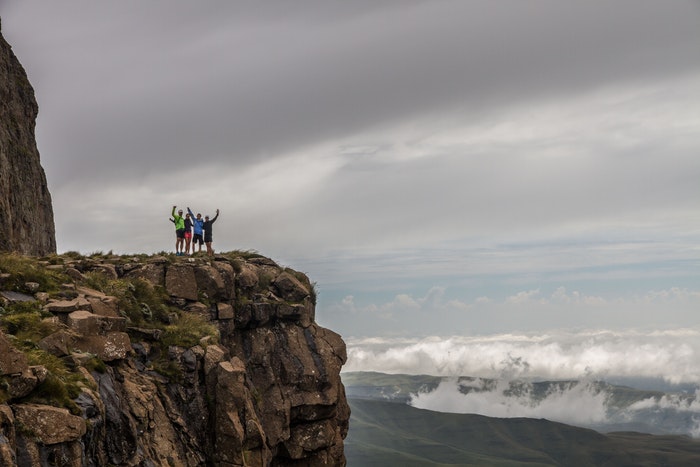 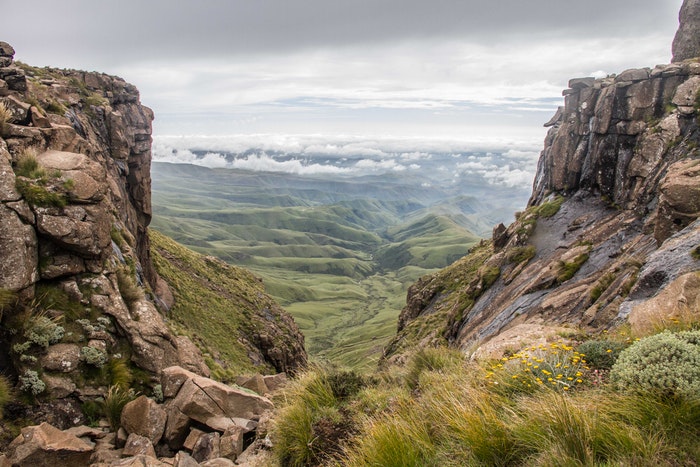 The Kingdom of Lesotho

Once you reach the top of the escarpment you enter the Kingdom of Lesotho, a whole new country. Living permanently at over 3000m altitude live some amazing people, tending their sheep and cattle, travelling light and living off the land.

It is rare to meet them, but as we relaxed taking in the views I heard the tell tale sign of sheep nearby. Jumping up and going for an additional run I ran to see who I could find. Kindly, this young herd boy allowed me to take a few shots. 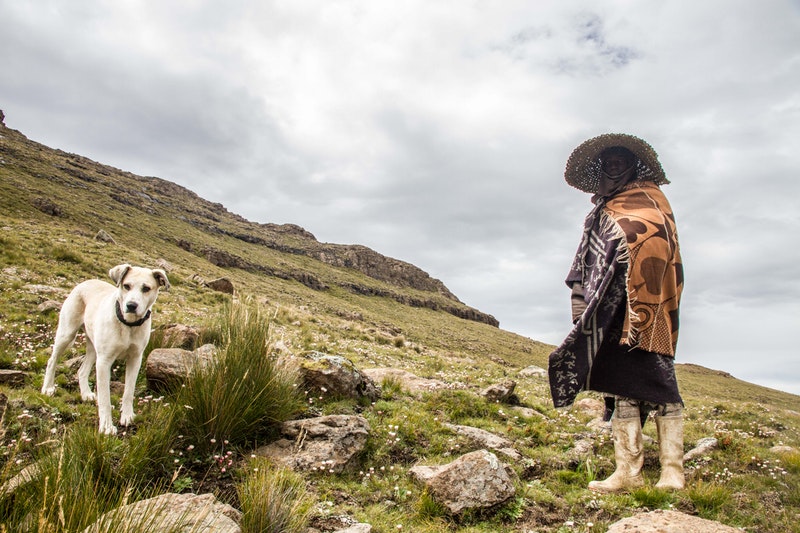 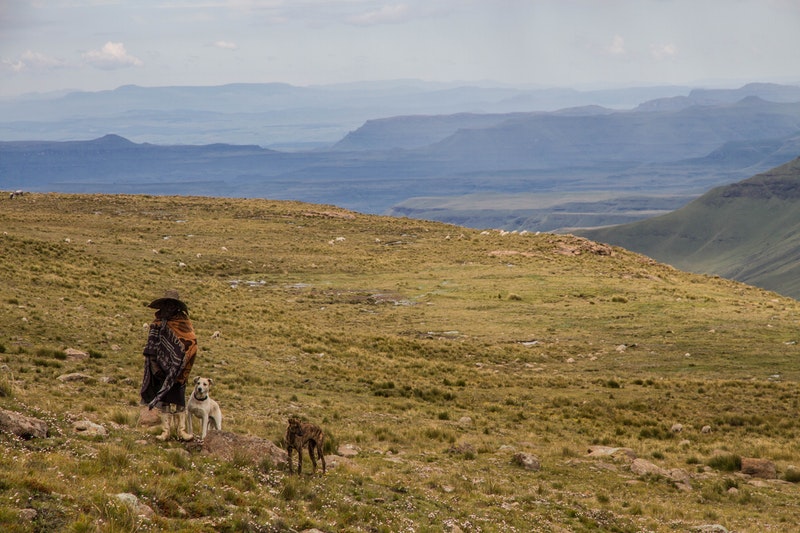 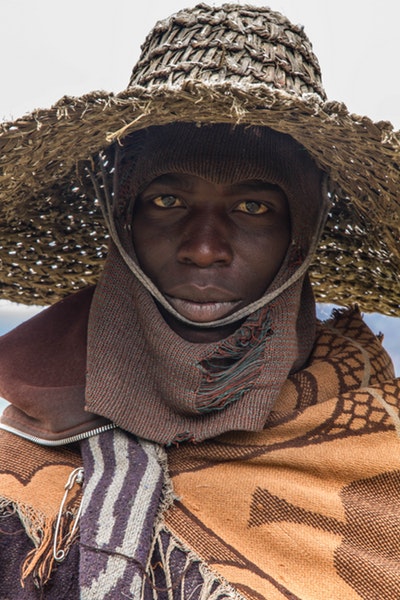 We thought we were out of the clouds as we got ready to leave and head back to the start but the weather had one more ace to throw at us. As we started to descend the mist started to roll in. Within minutes a massive cloud bank headed straight to us and began to make everything darker.

The time seemed very slow when we got back although when we took stock of the run, the lack of a path, serious elevation gain, adverse weather conditions, and extended snack and picture breaks, this all contributed to a great day of extended trail running. 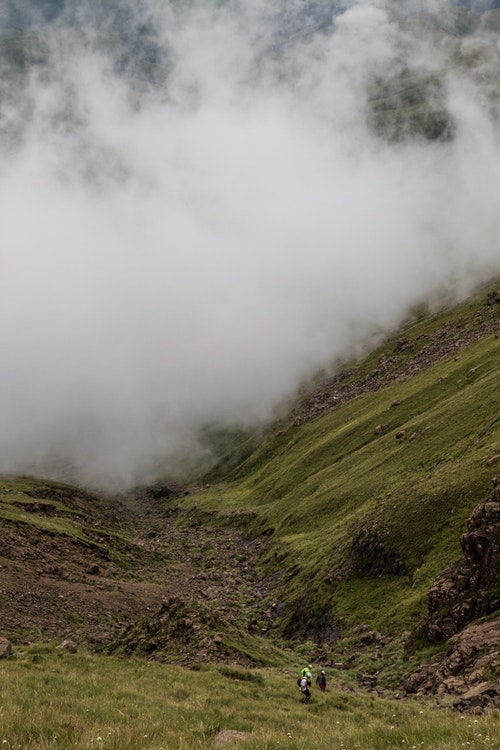 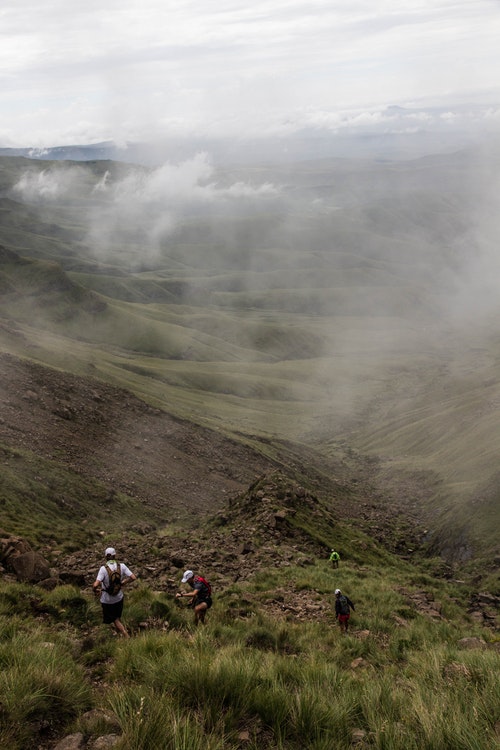 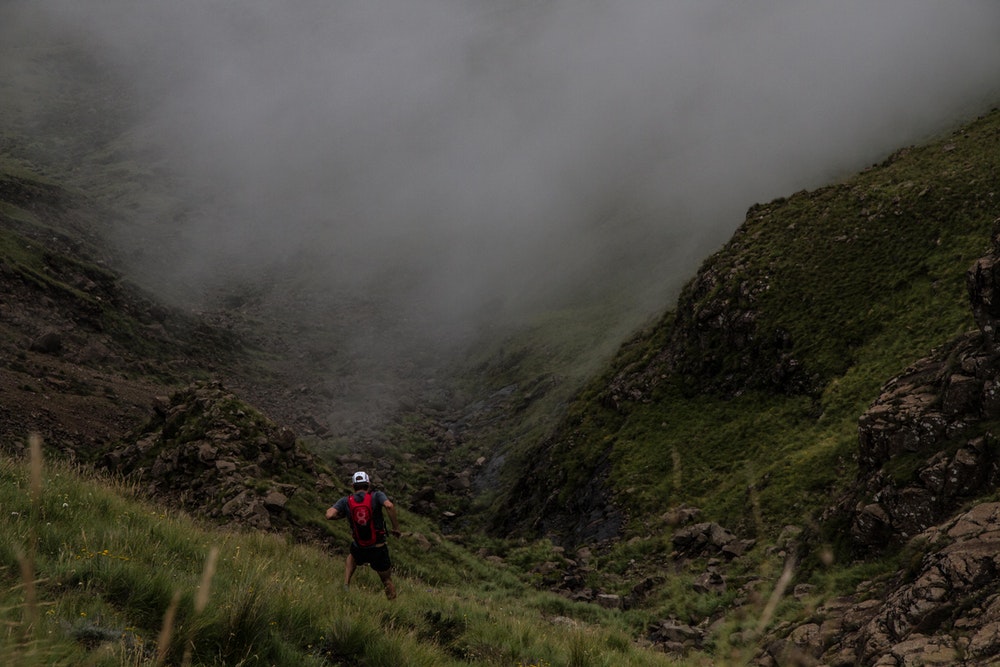 FOOTNOTES: Story and images by Ryan Sobey. Thank you to Giants View Estate (giantsview.co.za) for hosting us, and to Different.org