All gravel for dirt bikes - Stan Engelbrecht tells the story

170 kilometres in and I was finished. We still had over 50 kilometers to go, and the feared Ouberg Pass lay in wait. At just over six kilometers long, an elevation gain of 700 meters, and a steepest gradient of about 20 percent it’s nearly unrideable. And definitely unrideable for most after 170 tough gravel kilometers. Throw in a horrid headwind, unwieldy road conditions and running out of water, and you have the makings of a serious challenge - this is KAROOBAIX.

I designed this new race specifically for the emerging gravel or all-road bikes genre. Many of us have been riding this style of bike for years - basically a racy touring bike, or a cyclo-cross bike with a few modifications. But neither of those have been easy to come by in South Africa. Until now - bike manufacturers are all scrambling to get their version of the gravel bike onto shop floors. These bicycles are basically road bikes with clearance for bigger tyres, sometimes slightly modified geometry, often with disc brakes and mounts to anything from fenders to panniers racks and a host of bikepacking bags.

It’s easy to see why these bikes are absolutely perfect for South Africa and our vast networks of back-country dirt roads.

Now you have a bike that’s pretty fast on the road, and much faster than a stock mountain bike on a gravel road or Jeep track. And they’re often built around both 650b and 700c wheel sizes, allowing one to run mountain bike-size tyres and opening up the bike to even more technical terrain. This new genre is going to be huge in South Africa, and rightly so. We all need ‘one bike that can do it all’. Enter KAROOBAIX. 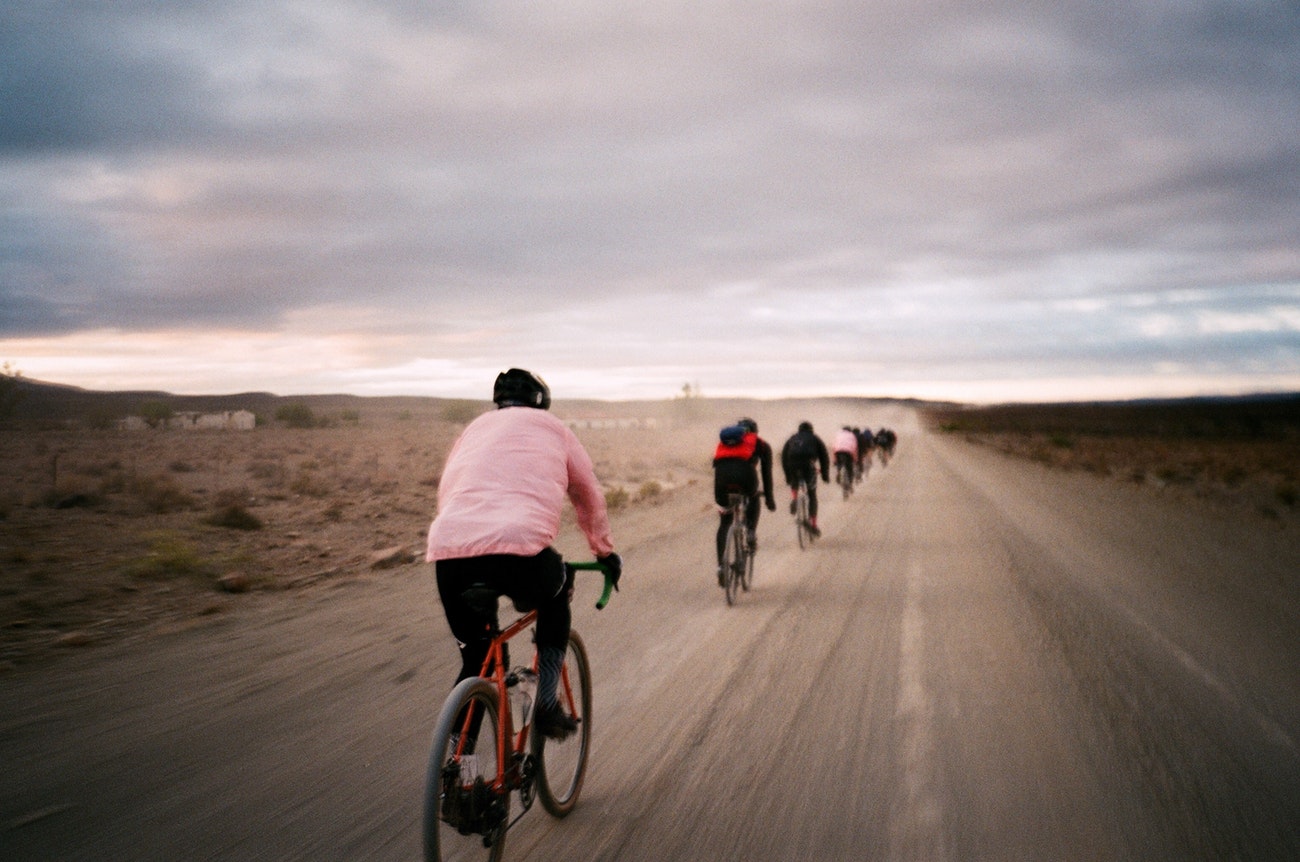 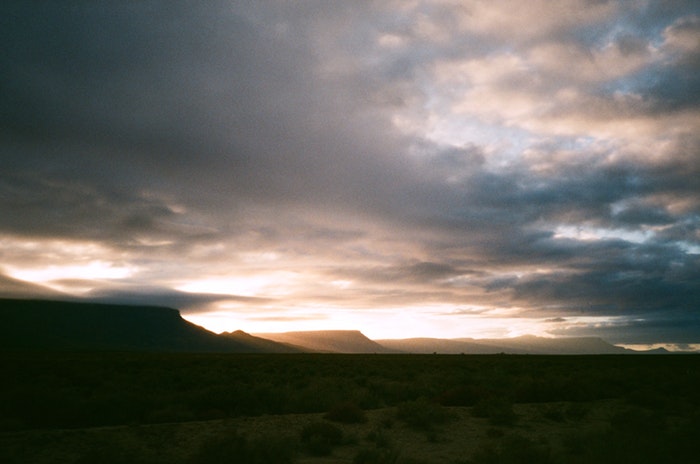 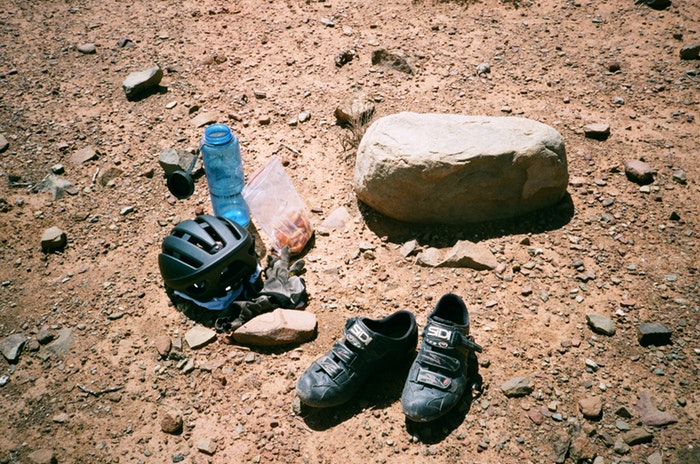 At five o’clock that morning we were all ready, in the early morning darkness, to take on our first of two stages - 221 kilometers from Calvinia to Sutherland, through the inhospitable Tankwa Karoo. With nervous energy and lights flashing we rolled out of town at high speed on the short tar section towards Nieuwoudtville before turning directly south onto gravel. The entire echelon was moving at great speed. Our heads were down and in the blur and flashing we saw nothing but the wheel in front of us.

The occasional ruts or corrugation would explode the peloton but it would quickly reform into a grunting train crunching over the gravel.

I liked imagining what we looked like in this darkened landscape from afar, and what we must have sounded like approaching close. As the road was good and no breath of wind to speak of at this stage, our speed was increasing and the peloton started spreading, dropping a few racers off the back. By now there was a glimmer of light developing on the horizon towards the east, and the front racers were positively flying. I dug around in my handlebar bag for my little Olympus, a compact film camera from the early 1980s, in the hopes of capturing the frantic energy as we started to drop down the escarpment into the Tankwa. I fired a few shots but I could tell by the length of the exposures that it was still way too dark to take photographs. I stuffed it back in my bag, put my head down and tried my best to keep up. By now the leaders were gone. But the rising sun was revealing the breathtaking landscape all around us, and we silently wished ourselves nearer to the coffee stop we knew was waiting for us. Carl and Sheldon from Deluxe Coffeeworks would be around 80 kilometers into the stage with fresh coffee, breakfast, and water. I knew we all hoped it would be a calmer affair when we reached it, but it was a quick coffee down the throat and a breakfast roll tucked into the jersey, and we were off. It was as if a sudden wall of wind hit us the second we got back on our bikes. This was the start of trouble. 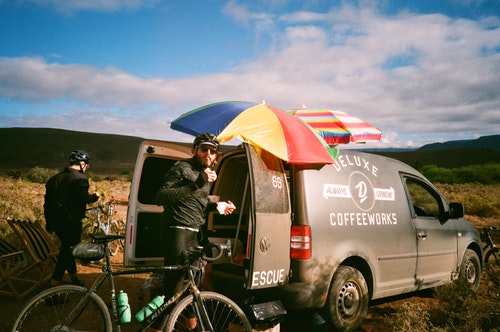 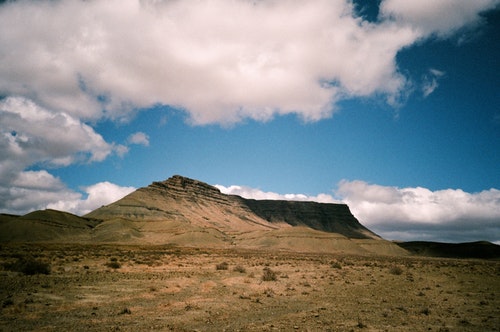 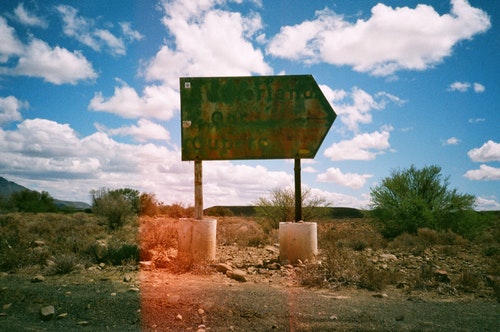 Up to this point we were all having a great race - no wind, good roads, spectacular views, and the promise of coffee. But now the roads suddenly deteriorated and an angry headwind was blowing stronger and stronger. The smaller groups of riders who managed to stay together up to the coffee stop were splintered all over the place, unable to stick to a wheel in the rougher conditions. I passed the National Parks offices and a considerable amount of riders who’d pulled in there to fill up on water. I was alone now.

The wind was a wall in my face. The next few hours were a muddled mix of trying to stay hydrated, eating, and moving forward into the hellish wind.

Considering we were almost 50 racers, the fact that I didn’t see another soul for hours confirmed just how incredibly vast this Tankwa Karoo was.

It came into view - the feared Ouberg Pass. In the months leading up to the race I had every intention of coming to the area to ride the KAROOBAIX route but it just never happened. My other race, the Tour of Ara, was just weeks earlier, and I’d been suffering some annoying back pain. Like many on KAROOBAIX, this would be my first time up Ouberg. Up to this point I was feeling pretty good. But now a sudden wave of fatigue hit me, and my back was hurting. Just an hour ago I was still entertaining a fantasy of trying to ride up the steep pass, but within the first 50 meters I knew this would not be possible. It took me an hour-and-a-half to reach the top, walking the bulk of it. I felt shattered, and a handful of riders passed me on the way up. 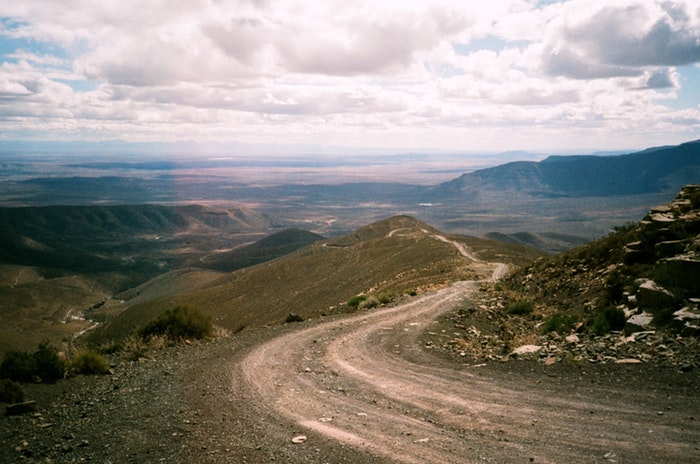 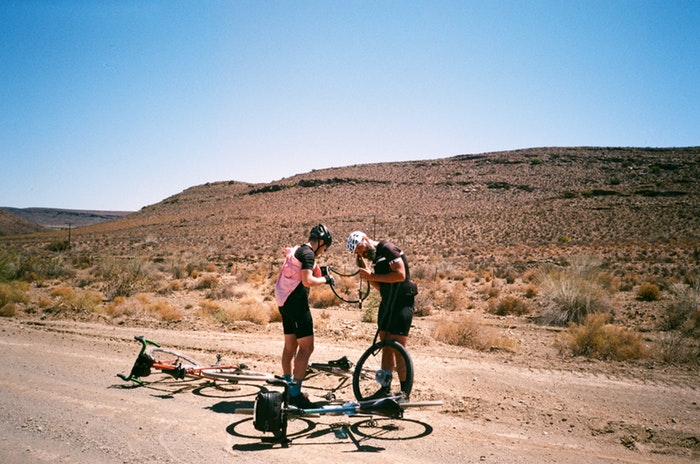 We all visited some dark places in that first 175 kilometers and up to the top of Ouberg Pass. It was the smiling faces of my good friends Nic and Erin, who’d created a charming little refreshment oasis for us at the top that brought the world back into a brighter focus. It was windy up there, but they positioned Nic’s old Volkswagen camper to create a perfect shelter with an awning and some tarps.

It’s impossible to relate how good it felt to be out of the wind, and to know Ouberg was behind you.

I lay on the rug Nic had laid out, and they fed me whiskey and cold Coke along with cheese and nuts and fruit and a jam-filled vetkoek. As riders arrived we discussed the pain suffering we endured to get here. We drank more, and ate more. But the reality that the day was not over was sinking in. We’d put off leaving for long enough, and it was time to go. I hugged Nic and Erin, and we got on our bikes. For the first few kilometers a seemingly surreal tailwind pushed us along at 50 kilometers per hour, but when we turned south, light sleet rain was added to the now-stronger headwind pushing against us. When Sutherland finally came into sight, our elation carried our exhausted bodies the final wet kilometers into town. We’d made it. 221 kilometers in some horrendous conditions. Stage two lay ahead. 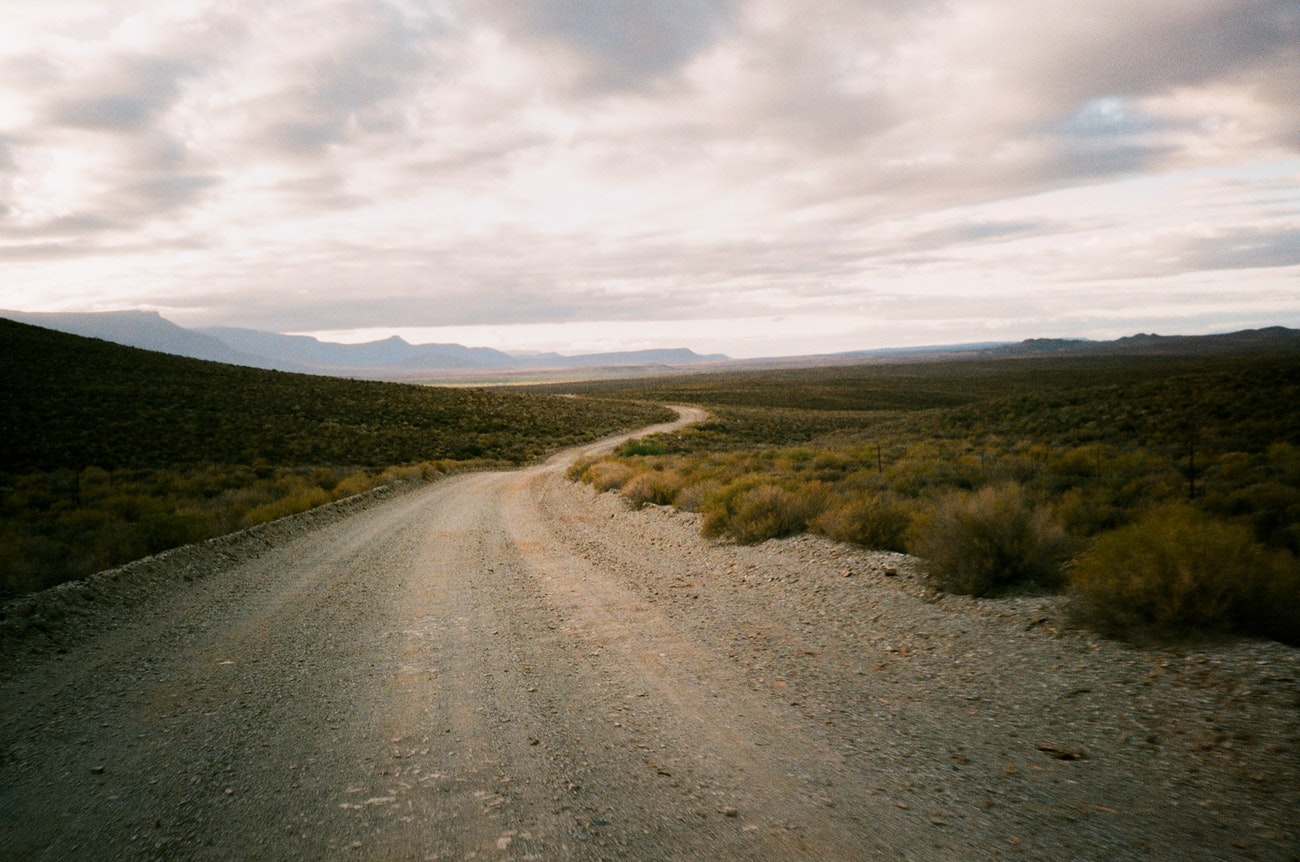 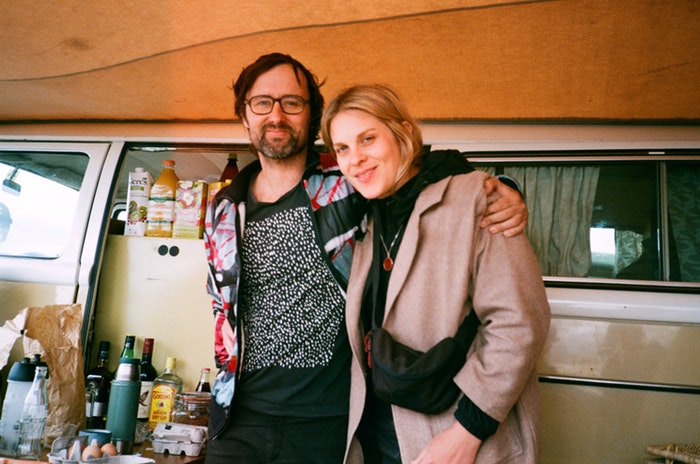 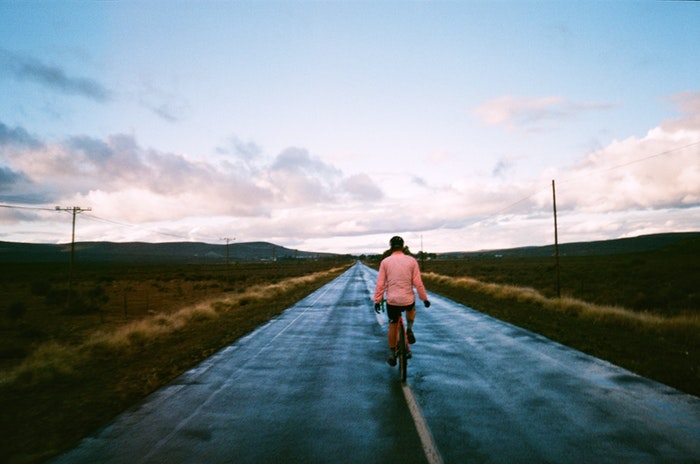 Not quite as early we left Sutherland for Matjiesfontein in minus 6℃ weather, but the day looked clear with the promise of little wind. Soon it warmed and it was a beautiful day out, but we all suffered a bit with the fatigued legs from the day before. Knowing that we only had 174 kilometers to go on the second stage, and that there was no huge climb was enough to keep us going. The route through the infamous Moordenaars proved spectacular nonetheless, and by the time we got to our fantastic lunch stop at an old abandoned farm near Laingsburg, the end was imminent. Lyndall, Mel and Elmi from Clarke’s Diner in Cape Town collaborated with Laingsburg’s local roosterkoek legend Poppie van As to create an incredible mid-race distraction for us on the stoep (verandah) of a grand old farmhouse.

We joyously stuffed our faces with delicious black bean and fried egg breakfast ‘roosterkoek’ and washed it down with Mimosas. It was hard to tear ourselves away, but Matjiesfontein waited and the race leaders had passed hours before.

One more beer and we were off. Those last few kilometres were grueling but rewarding, and before long we were rolling over the finish line to the cheers from the Lord Milner Hotel staff, racers who’d already finished and a handful of spectators. The news - Charles Keey won the inaugural KAROOBAIX, with a time of 15 hours and 39 minutes for the 395 hard kilometers over two days. The next racer came in almost an hour later. And the last racer to finish, almost 12 hours later. This was one hard race, won by one tough man.

For me this was a serious challenge. Until our first stage I’d only ever cycled 200 kilometers twice in my life, never mind 221 kilometers in some brutal conditions.

But now I’m addicted. I want to push further, harder. I can’t wait for the next one. 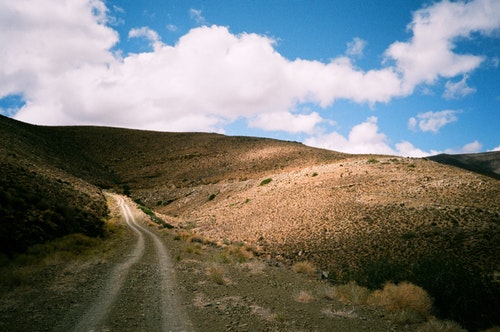 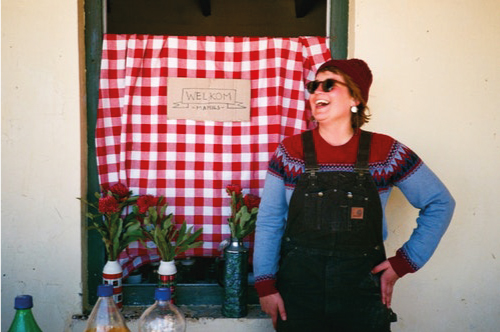 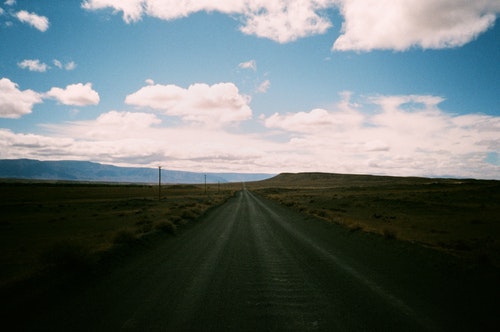 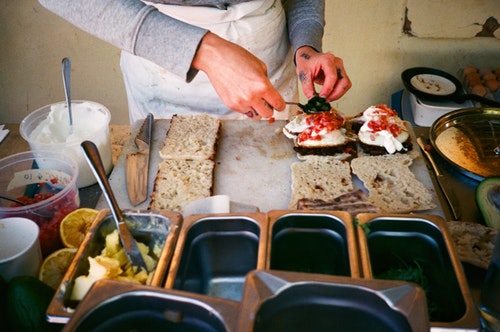 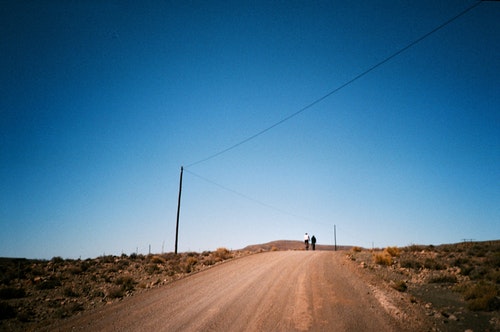 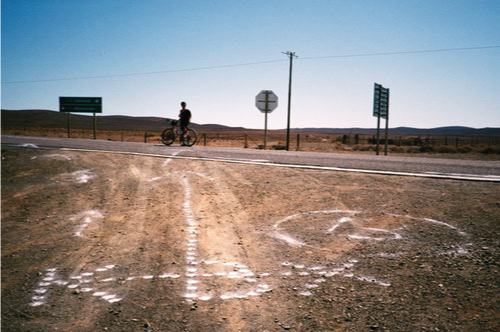 Words and images by: Stand Engelbrecht,
founder of www.karoobaix.co.za