As told by its people and spaces

Johannesburg is one of those cities one simply cannot love from afar. It requires immersion in its gritty, vibrant and sometimes-frenetic self before this decision can be made. Poet Mongane Wally Serote spoke metaphorically of the city's iron breath and neon flowers, while author Alan Paton declared that one Johannesburg was more than enough. Hardly a favourable impression.

The backstory to this speaks of a city that rapidly rose to wealth but crushed more than a few souls along the way. Even today, many a migrant - local and foreign - comes to the city seeking their fortune. So how does this city engage with its people? We spoke to two self-proclaimed Jozi-lovers, who have made it their business to tell its story through the cityscape and the people that populate it.

Jo Buitendach, archeologist and owner of Past Experiences, a Johannesburg walking tour company, has spent much time in the city and knows it intimately.

"An African city is a wonderful thing, and the most beautiful thing is its people."

"The city has taught me everything. I was naive when I started (in 2009), but this was good, because I learnt so much. As time went on, I became more sensitive to [the] people [who live there]." 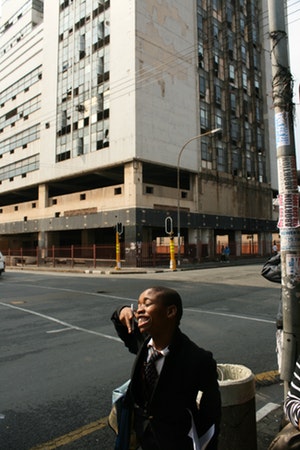 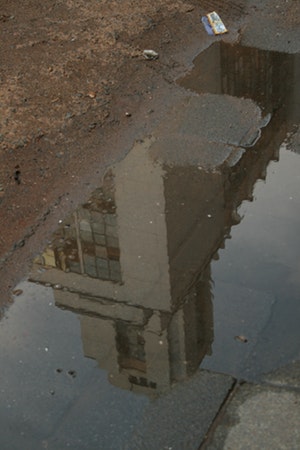 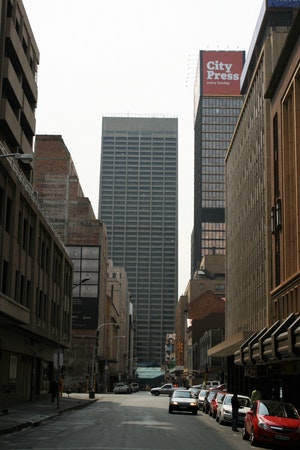 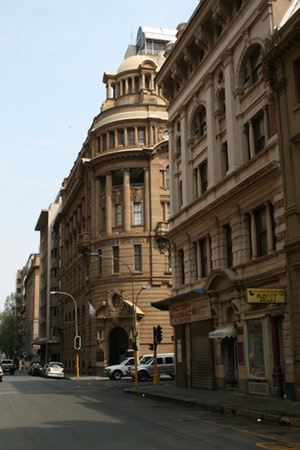 She tells a story that captures her appreciation of the contradiction that is Jozi. "To one person, an open manhole filled with water may represent decay and mismanagement. To another, this is a source of water to be used for their car wash business."

"People are so negative about Johannesburg, but it's seen as a place of opportunity for the rest of Africa," she says. "We just need to be aware of what is around us."

Despite the opportunistic idealism of some Jozi-dwellers, Buitendach acknowledges the hardship that comes with being a city dweller. "It's a complicated city. Some people live tough lives and want to get out," she says.

Buitendach isn't just about scratching the surface - she wants to understand the dynamics of the city. "I'm interested in the political history of Joburg and its influence on the way things are now - the Group Areas Act is an example of this." Alluding to the harsher version of the city depicted by Serote and Paton, Buitendach mentions that the city was segregated from the beginning, with the marginalized people groups being pushed to its outskirts. 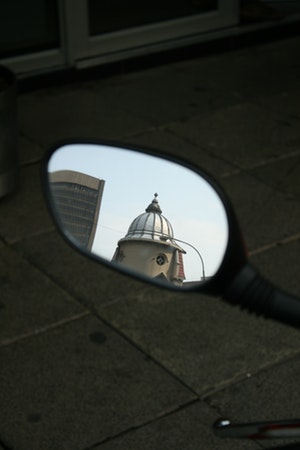 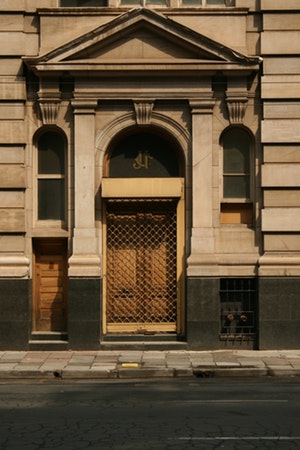 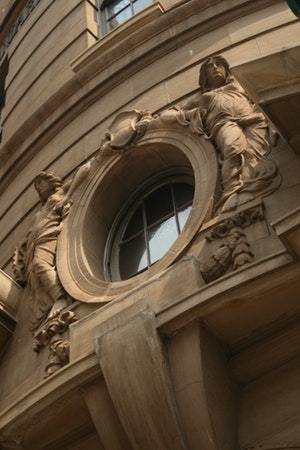 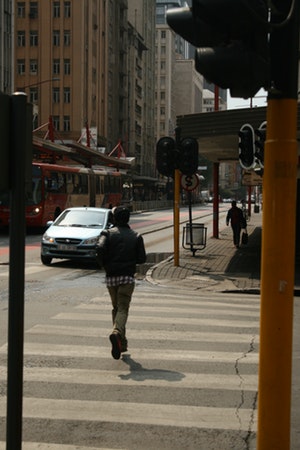 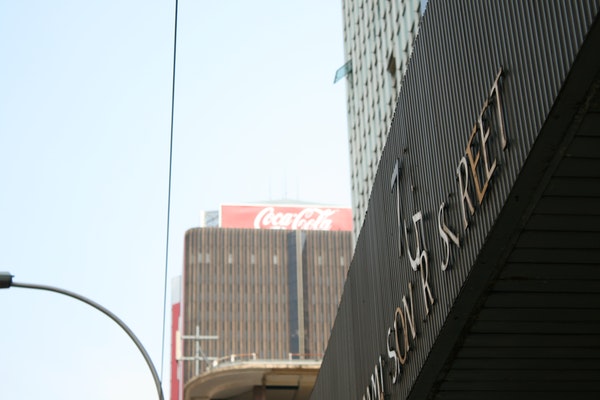 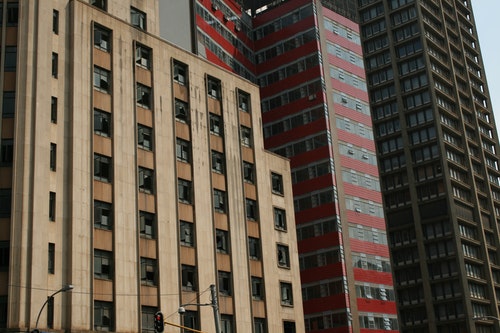 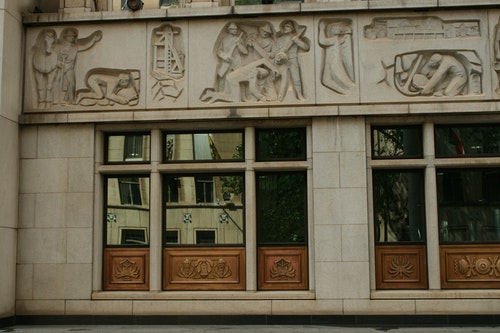 For those interested in South Africa's political history, Johannesburg has much to offer.

"Everyone goes to Robben Island to learn more about Nelson Mandela, Walter Sisulu and Oliver Tambo but there's so much of their history in Johannesburg," Buitendach says.

She mentions the city's street art and graffiti as another huge drawcard. "I'm drawn to the areas with graffiti, and love the grittiness of the fringe areas of the city - Lorentzville, Bertams, Jeppestown, Maboneng and New Doornfontein," she says. Her love for graffiti has also inspired a walking tour focusing on just that. 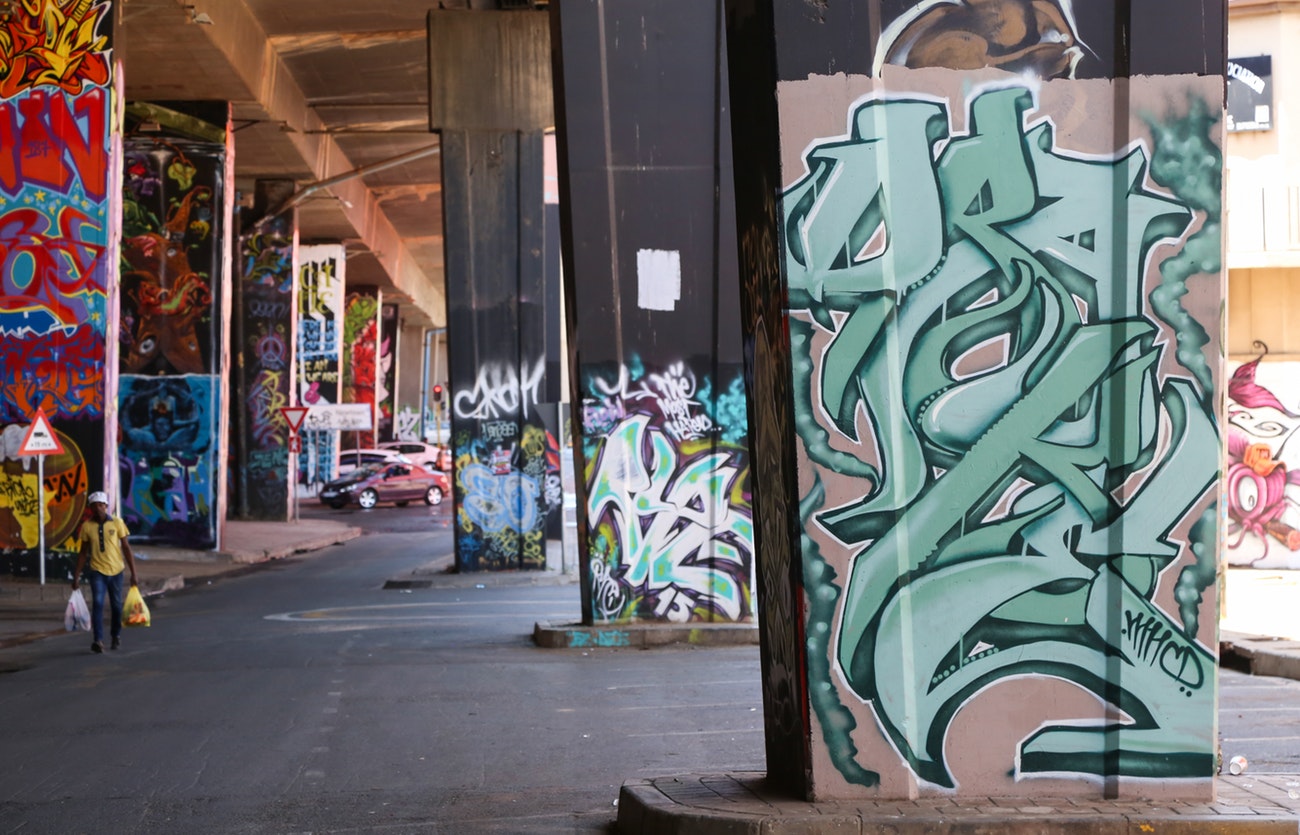 Buitendach's favourite part of the city is Ferreirasdorp, the oldest part of Johannesburg where the city's first (literal) gold diggers made their camp. "It's one of the first areas I worked in. I buy fabric from shops here, have my clothes made by a lady in the area and I also shop at the local Chinese supermarket," she says.

Being closely acquainted with the city for almost ten years means that Buitendach has seen a lot of change. "A lot of areas have had regeneration done," she mentions. Buitendach has a mixed opinion on gentrification, seeing both the difficulties and opportunity it creates. "I couldn't do what I do without these areas, particularly in terms of the security they provide and spaces and attractions they create. I give free tours to the community in Jeppestown to reinforce that we're not part of gentrification [that seeks to exclude]". 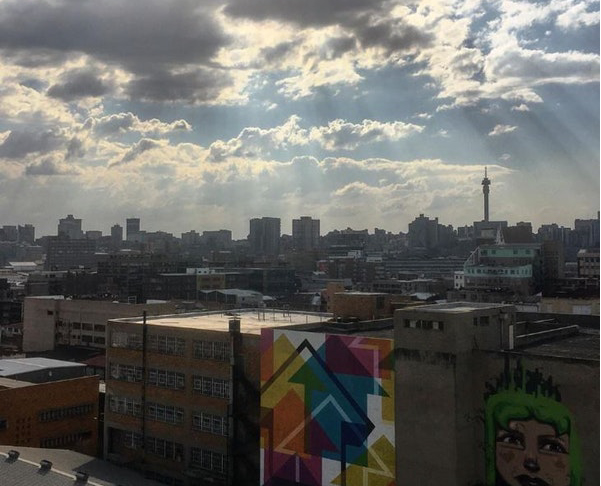 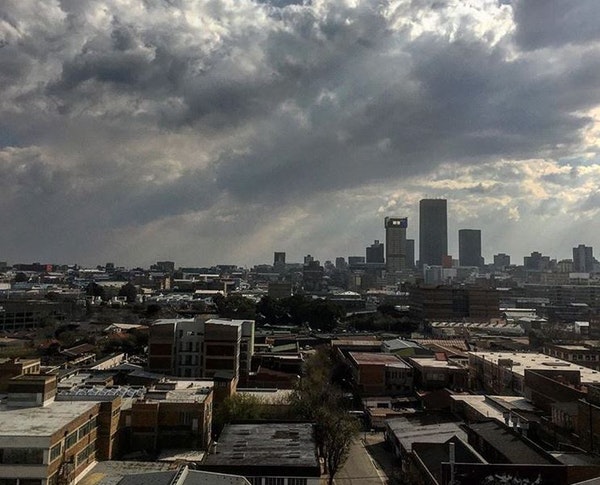 Architect, urbanist and heritage architecture champion, Brian Kent McKechnie, shares some of Buitendach's sentiments on gentrification. "Maboneng has been criticised for its exclusivity, but without the capital investment, there would be no creation of jobs, nor would there be opportunities for grassroots entrepreneurs. It brings money into the area to benefit people."

McKechnie sees a city's architecture as a visual documentary of its history that helps one understand its story.

"Johannesburg is relatively young as it was founded in 1886. A 123-year-old building in London is not considered to be very old. The fact that none of the earliest buildings in Johannesburg remain, bears testimony to the rapid growth of the city."

The city's economic and political climate also made its mark on the city's skyline. In the 1930s, the economic boom brought on a fascination with the Americanisation of the architecture - most notably the Art Deco style, embodied by buildings such as the Anstey's Building. From the 1930s to 1950s, there was also a big push towards Modernist architecture. A second economic boom in the 1960s and 1970s led to the adoption of another American trend - high rise buildings, with the Carlton Centre capturing the essence of this trend. For a while, it was the tallest building in the Southern Hemisphere, and was up until very recently, the tallest building in Africa. 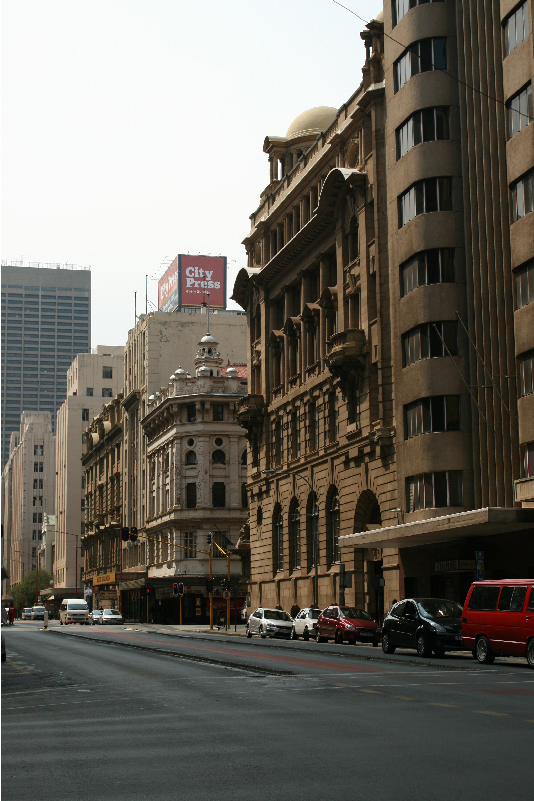 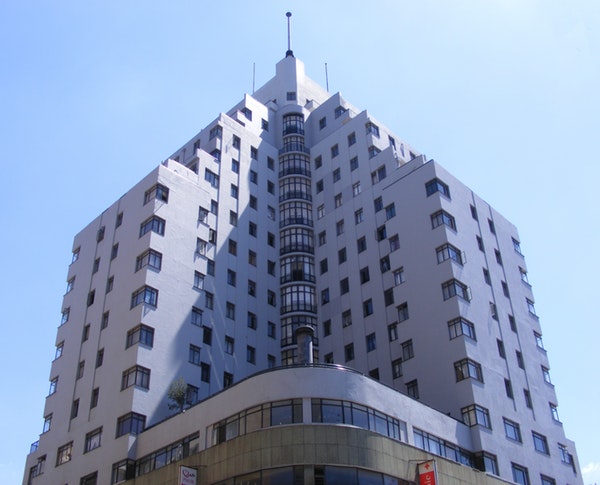 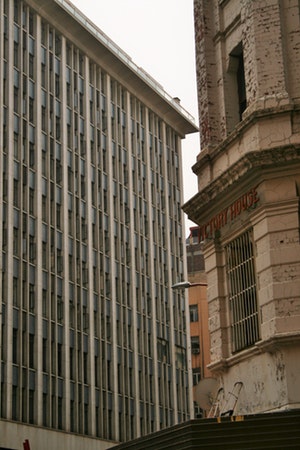 South Africa's apartheid-imposed isolationism and later, the political turbulence, also influenced the city's architecture. "The narrative then turned to one lacking in confidence, which evidenced South Africa's disengagement from the world. From the late 1980s to the mid-2000s, there was no development in the city," says McKechnie. This, combined with the development of a highway network and a lack of parking in the inner-city, caused a rise in decentralisation.

McKechnie laments the fact that with decentralisation, came a disconnect. "Many of the buildings in Sandton have been designed to turn their backs on street, instead of creating a democratic space. A walkable street grid acts as an equalizer of sorts." He contrasts this with the downtown Joburg office spaces that provide "ample opportunity for interaction". His conclusion is that this speaks of a culture of fear and control - if the city cannot be controlled, then the response is to disengage and create a bubble.

A more recent backlash to decentralisation has been a yearning for a diverse, authentic urban environment, causing a number of people from all over Johannesburg to move back into the city.

"There's a cultural and socio-economic diversity - it's an authentic democratic space, which has become so over time," McKechnie says. 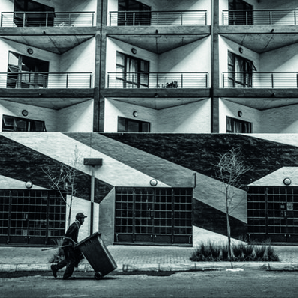 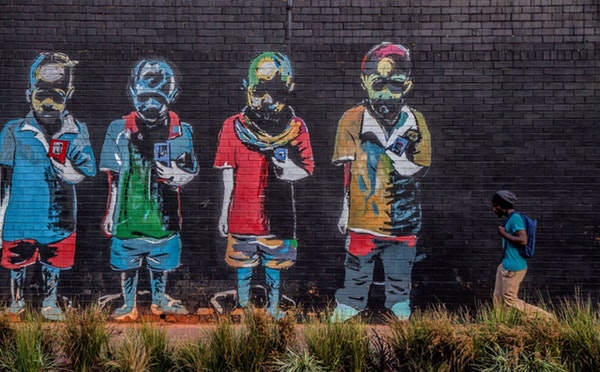 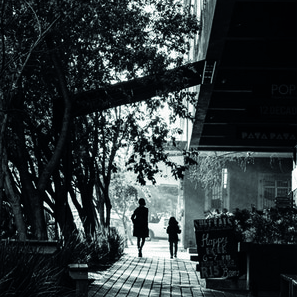 In thinking about the Africanisation of the city's architecture, McKechnie suggests that it is not so much about a specific style, but rather about how a particular space is used. The Constitutional Court is an example of democratic space transformation that is open to the city, and in this way adheres to the traditional African typology. Similarly, the circular shape of the recently-built City of Johannesburg Council Chamber in Braamfontein is a nod to organic African architecture, while its transparency is symbolic of inclusion of the rest of the city.

The impression of the city that one is left with is never simple. It is a place that beckoned many with the allure of riches, only to give some a hand up while others came crashing down. It is a place that speaks of rich cultural heritage but also evidences the time when South Africa engineered its own isolation from the world. It is a place that is constantly in flux, giving people the opportunity to invent, and re-invent themselves. In any other context, it would be too much to wrap your mind around. Here, we simply call it Jozi.

Words and images by: Simone Gregor
unless otherwise credited