Explosive Sounds From The Underground

In rehearsal and on stage with a Johannesburg band that's broadening new sounds.

It's a midweek morning and in Sophiatown, a rehearsal room is coming alive.

The space is filled with musicians - trombonists, guitarists, vocalists and more - and all of them are engaging in their own processes. Some are on the phone organising flights, while others are readying their instruments or pulling up sheet music on their iPads. A large speaker towards the back of the space rests atop a cluttered table top while the floorspace is mostly taken up by pedals, music stands and a mess of audio cables. On the walls and resting on the shelves of a bookcase are posters of jazz concerts gone by and a small framed portrait of Miles Davis. After some time, trumpeter, composer and producer Marcus Wyatt steps up to his music stand and calls for quiet.

"Guys. Guys!" he waits a while for the room to level out. "Alright let's run through 'Basement Anthem'."

Wyatt counts them down and the band launches into the song, a swelling, brass-heavy beat that's become one of the group's go-to live songs. 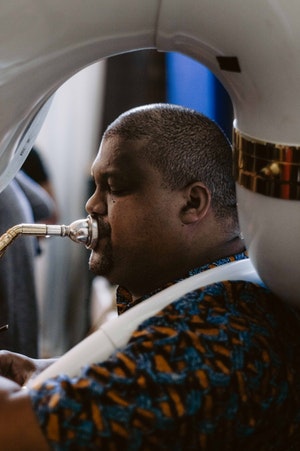 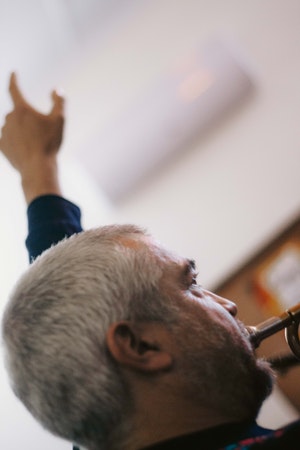 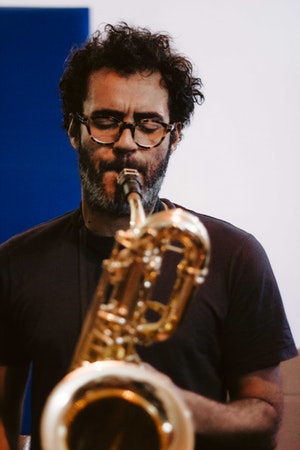 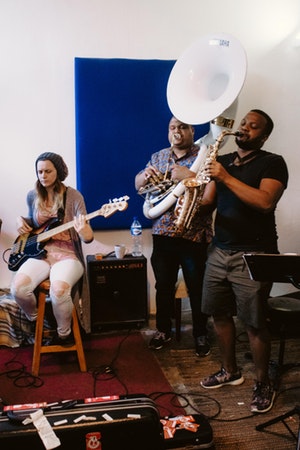 The band is Bombshelter Beast - an experimental group of multitalented and well-known musicians from Johannesburg. You've probably seen the name online, or on flyers or posters throughout the city. Or maybe you've seen a few of their music videos. None of it really matters until you’ve experienced Bombshelter Beast live, though.

To see Bombshelter Beast live is to experience an entirely different kind of performance. The band frequently gets crowds at The Orbit on their feet, and are well-known for starting their shows off-stage - slowly moving their way through the crowd, instruments blaring as they take the stage one at a time. Combine the group's energy with their mixed-grill sound of kwaito, balkan, ska, hip-hop, jazz and more, and you're in for one hell of a show.

Just how did a band like Bombshelter Beast come to be? Back in 2010, Wyatt was commissioned to compose a soundtrack for a local film centred around a goofy soccer team trying to make it big. He went with a playful take on the soundtrack to compliment the comedic, light-hearted nature of the script, but the film never came out. A few years later, Wyatt dug up the old sounds, got a few musicians together and the band was born.

"[Bombshelter Beast] was actually the name of a piece written by American composer Maria Schneider - talking about the air raid bunkers during the 2nd world war!" explains Wyatt. "But it perfectly sums up the spirit of this band - underground, wild, explosive, and quite crowded!"

Like most bands of this scale, the musicians come and go, but a few have been there from the start. Bass guitarist Romy Brauteseth has played a part in Wyatt's own jazz gigs for a while now, drummer Justin Badenhorst has been laying down his signature rhythm from the jump, and the sounds of trombonist and sousaphonist Alex Hitzeroth are crucial to the Bombshelter Beast ensemble. Those who've come and gone (and frequently return for select shows) include the likes of kwaito and hip-hop MC Pitch Black Afro, and jazz trombonist and vocalist Siya Makuzeni.

They run through a few more tracks - some are perfect, while the band thinks other tracks need a little more work before their upcoming gig. In between songs, the atmosphere is light and playful. For a room full of accomplished musicians, none of them take themselves too seriously. They end with a quick run-through of 'Taka Takata' before calling it a day. 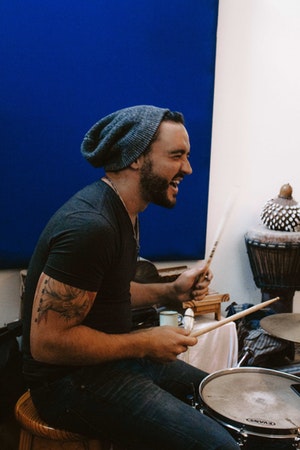 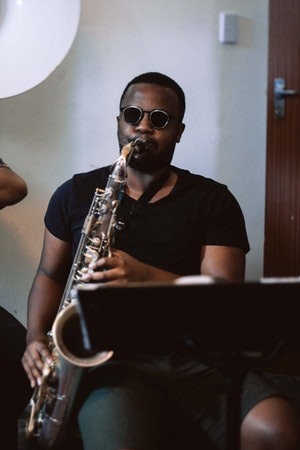 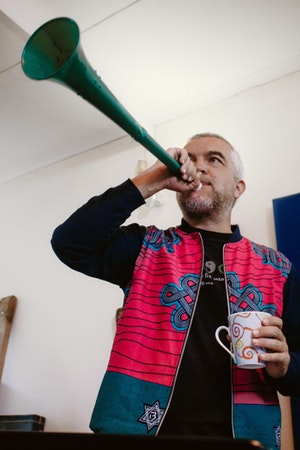 A few days later at Rumours Rock City, everyone is scattered throughout the venue. Drummer Badenhorst is grabbing a beer with some friends outside while saxophonist Janus van der Merwe grabs a bite inside with some of the other members. Dionne Song, one of the group's vocalists, is playing a game of pool. Song, who joined Bombshelter two years back, has a background in musical theatre. After a call from a friend - an acquaintance of Wyatt's - she went through for a meeting with the band and was an instant fit.

"Look, this band is about having a lot of fun," Song says in-between shots. "Youll see this evening, it really is just about the energy - the complete abandon. Because it's such a big band and because everyone in the band loves being in it, there's a sense of teamwork and it feels almost effortless at times."

It's also due to the scale of the band and the varying styles and backgrounds of its musicians, that Bombshelter Beast achieves such a unique sound. Because where else can you hear someone rapping over a track that dances between dub, jazz, and swing music?

"You've got to look at the people we've got in the band," says Song. "Pule speaks a bunch of different languages, for example, he's a linguist. And then my home language is Afrikaans. It's everybody's experiences - we're a diverse bunch of people so that will reflect in the sound, and in what you see."

Song pauses and looks over at the pool table before adding, "To me, Bombshelter Beast is that friend you just love having around, you can go with her to the white party, you can get down in your All Stars, and you can go to Sandton with her, put on a heel, look fly, put on a weave - then you can also travel with her, you know? You can really just do a bunch of different things with the music. I don't think I would have ever brought this kind of performance personality out without this band." 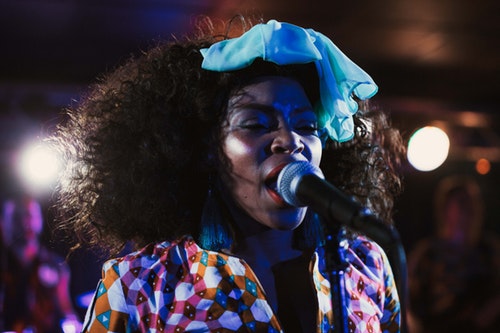 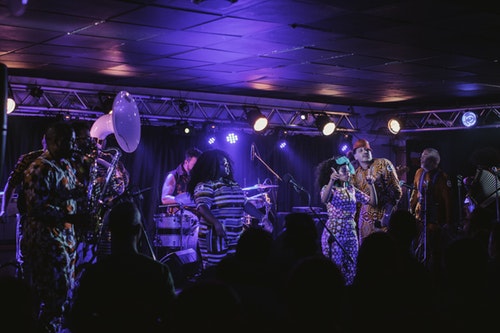 Pule Welch, another one of the band's vocalists, is sipping a beer and watching the game of pool play out.

"I actually started as a featured artist for Bombshelter Beast," he explains. "Marcus used to call me for certain gigs to do a couple verses here and there. I'd been working with Marcus for some years before, which is more or less how most of the band members came to be in the group. I was here from the beginning, just not permanently."

Welch is well-known for his work as a comedian, TV host, rapper, and linguist. Bombshelter Beast, he says, allows him to merge all of these skills.

"Everything that I do, I can put it into this band and just really have fun with it, and especially linguistically - to push the amount of idioms that I could be using, things like that. From isiZulu to SeSotho, to Polish, French, Portuguese - everything comes together," says Welch. "In terms of Bombshelter, I think from the beginning it's been a direct intention to make something that has a really multi-faceted sound, because that's how something new comes about, you know? It takes a while to find itself, but once it comes out, you've got this new sound!"

Wyatt later echoes this, explaining that when it comes to a band with 13 to 14 members from all walks of life, there's really no other direction they could've taken but an entirely explorative one.

"We always want to dance, but we don't want to make boring dance music. So anything goes really - there is no brief here! We don't necessarily see this as experimenting, more like exploring... the love we have is for interesting, yet accessible tunes," he says.

"Going forward, we want to collaborate with cool, groovy musicians from all walks of life, and we aim to travel - both literally and figuratively!"

This month alone they'll be playing in Maputo at the Azgo Festival, as well as shows at the Dunkeld Bowls Club, UJ weekend of Jazz Festival, and Klimaxx Festival. For now, though, all energy is focused on the immediate show. 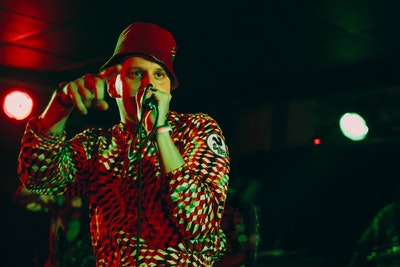 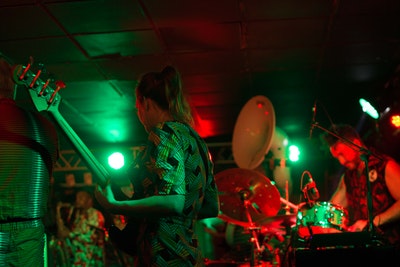 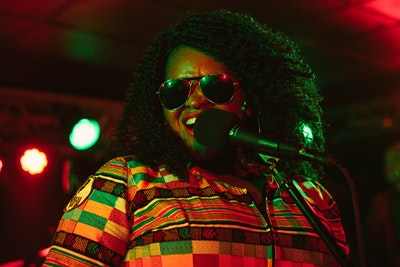 Rumours is filling up now and the crowd seems eager for the show. In the bathrooms, members of the band are putting on their outfits and prepping for the performance.

As the crowd starts to shuffle around the front of an empty stage, a trombone sounds out from the back of the venue followed by some drum sticks being slapped together. The brass comes in, the vocals too, and one by one the band marches through the venue, standing on tables and dancing with the crowd as they go along. By the time they're on stage, the crowd is primed. The musicians take their places, drum sticks count down the intro, and Bombshelter Beast comes alive.