Johannesburg is a relatively new city by human standards. Thirteen decades ago, there was very little to see here except craggy rocks, wildlife, a few streams, and tall, yellow-green grass.

Below the surface, of course, was a golden fortune that changed everything.

During the gold-fevered 1880s, a city was quickly born. The highveld grass was covered over with buildings, roads, and thousands of people and trees from across the oceans.

Although I’ve seen lots of photos of early Johannesburg, with its muddy streets and horse-drawn carts and ramshackle houses, I haven’t seen any pictures of Johannesburg before it was Johannesburg. It’s hard to envision what that vast emptiness must have looked and felt like.

Luckily we still have the Melville Koppies Nature Reserve, one small pocket in the city where pre-Joburg Joburg still exists. 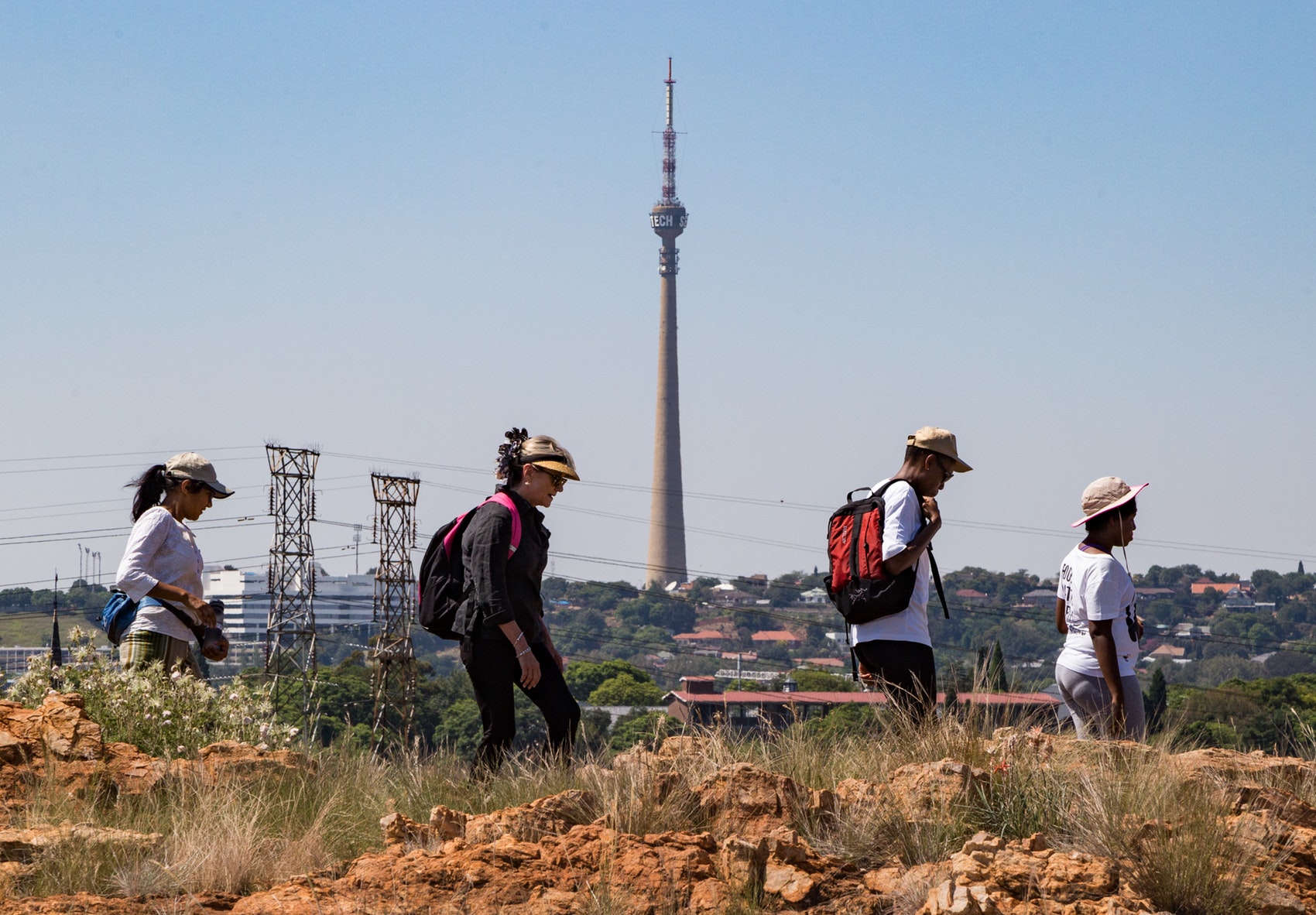 The Melville Koppies, which covers about 160 hectares, is technically a Joburg City Park. But there are no park benches in the Melville Koppies – no braais or paved walking paths or children’s playgrounds. It’s not a park in the conventional sense.

The Melville Koppies has only craggy rocks, wildlife, a stream, and tall, yellow-green grass.

On the Koppies, the only reminders of modern-day Joburg are the suburban houses pressing up against the border of the reserve and the dramatic city skyline views visible from the top of each primordial hill.

I live a couple of blocks from the Melville Koppies and walk there often, usually in the east section (the Koppies is divided into three sections – East, Central, and West), which adjoins the Melville suburb and is open to the public during daylight hours.

In fact, Melville Koppies East is the first place I walked when I moved to Joburg eight years ago. I watched my first Joburg sunset from the Melville Koppies. It’s where I met my first guinea fowl, as well as my first scorpion. The Koppies enchanted me from day one.

But it had been years since I participated in one of the Friends of the Melville Koppies (FOMK) group walks. These guided walks are the only way to access Melville Koppies Central, which is normally closed to the public due to its rare biodiversity and Iron-Age archeological sites.

So I laced up my hiking shoes and joined the first cross-koppie hike of the year in January 2018. 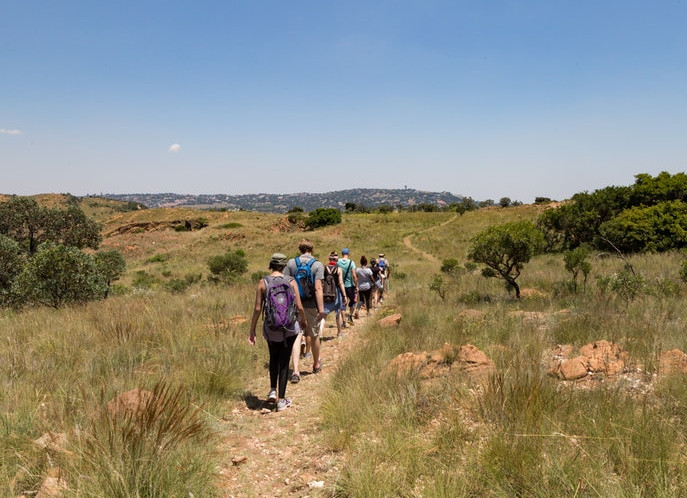 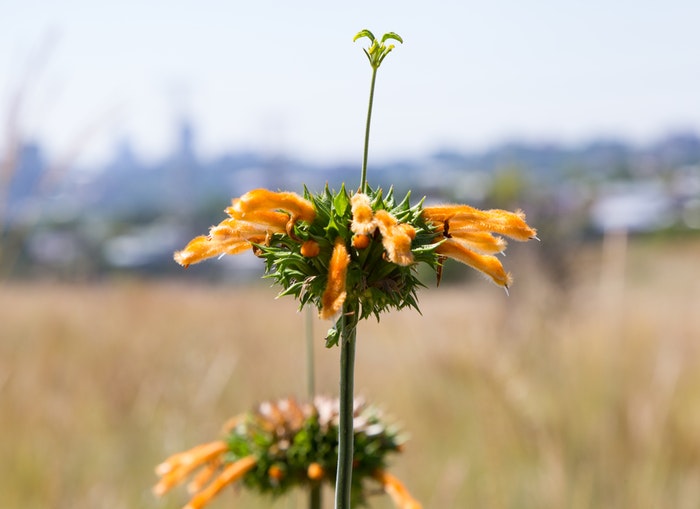 Friends of the Melville Koppies

The City of Joburg proclaimed the Melville Koppies a nature reserve in 1959, and it is an official Johannesburg City Heritage Site. But the exhausting job of maintaining the Koppies has always fallen upon private individuals.

Over the years a number of conservation heroes – Richard Hall, Norman Baines, Wendy Carstens, and others – have worked tirelessly to stave off human encroachment and alien plant invasions on the Koppies, preserving this piece of ancient South African heritage in the middle of the city suburbs.

FOMK, a small non-profit organisation, keeps the reserve pristine through sheer force of will. Wendy Carstens leads a small team of laborers who work full time beating back blackjack, bugweed, and other invasive plants, picking up rubbish, discouraging squatters, and maintaining footpaths. FOMK also liaises with members of the African Independent Churches, who worship on the western side of the Koppies on weekends.

FOMK receives minimal support from the city and is dependent on private donations and funds raised from its weekly walks. I am about to participate in one such walk: a strenuous hike across the Koppies that takes place twice a month. 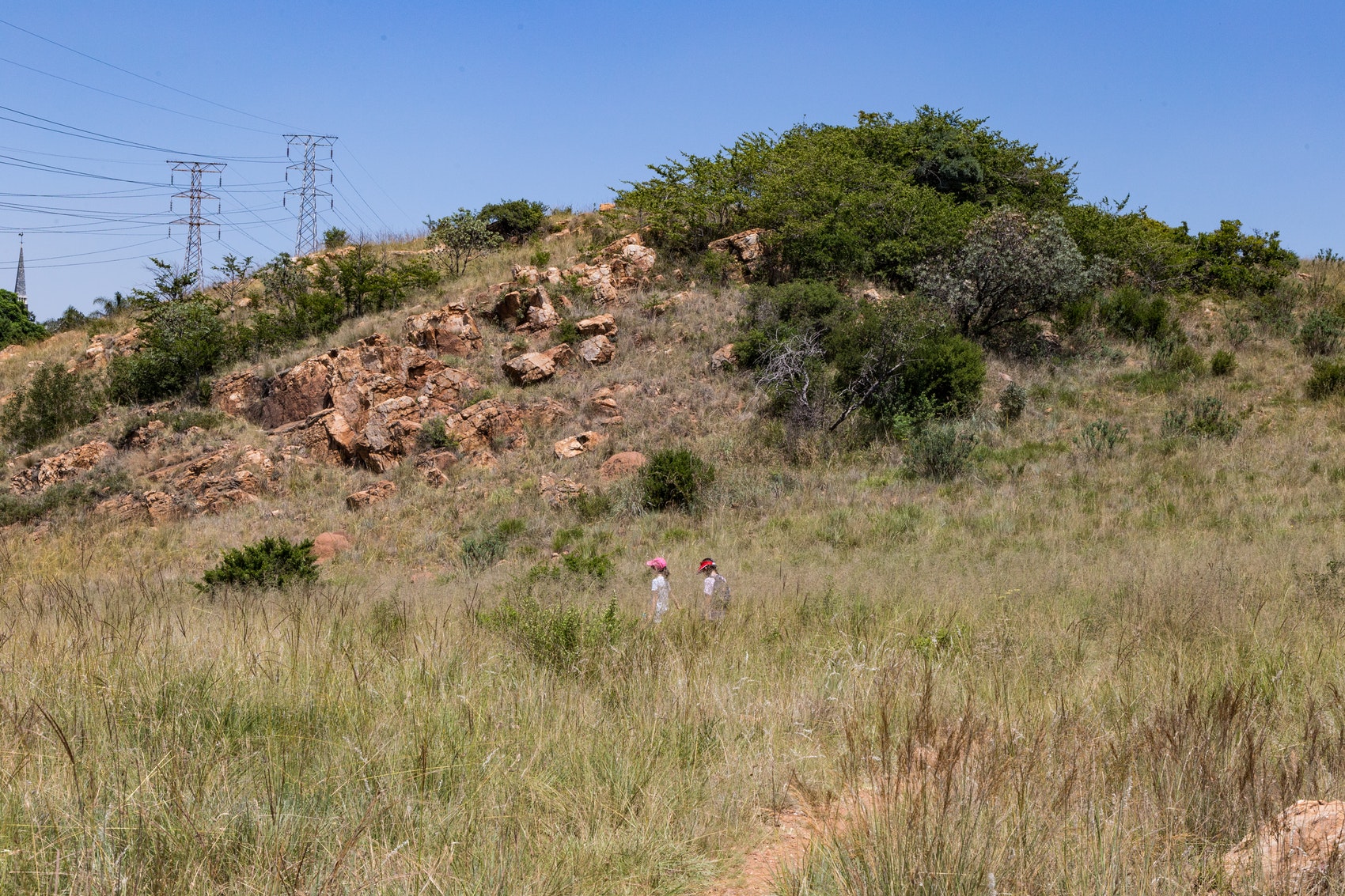 Sunday Morning on the Koppies

I arrive at Mark’s Park, across the road from the entrance to Melville Koppies Central, at 8:15. The hike won’t start for another 15 minutes but the parking lot is already teaming with cars and people. More than 100 participants have shown up for the first hike of 2018.

The hikers’ ages seem to range from 8 to 78. Every color of the South African rainbow is represented.

It’s already hot. I pay my R60, rub on some sunscreen, and wait for the walking to begin.

“This hike isn’t for sissies,” warns David Carstens, Wendy’s husband, addressing the crowd at the start. FOMK offers shorter, more leisurely walks, focusing on the history, flora and fauna of the Koppies. But the cross-koppie hike is more brisk and designed for exercise, usually covering about ten kilometers in three hours.

I’m disappointed, as I rarely visit the western side and remember it has one of the city’s best skyline views. But David assures us we’ll still get plenty of exercise.

We troop across the road in a long, snaking line, stopping to admire the painted-tile sign for the central section of the nature reserve. A guide unlocks the gate and we file inside.

The invasive black wattle tree, native to Australia, once plagued the Melville Koppies. But thanks to the efforts of a committed group of volunteers in the late 20th century and the hardworking FOMK staff today, wattles have been eliminated. The Koppies’ trees are all indigenous now – small acacias and stinkwoods, mostly – and concentrated in Melville Koppies Central along the Westdene Spruit.

Our group marches through the thick tangle of trees and shrubs, crossing the stream on a trail of stepping-stones. Later we pass through a grove of proteas, not in full bloom but with a few ball-shaped pink blossoms trying to open.

Our first viewpoints look out over the leafy-green northern suburbs. The group begins to fan out, faster walkers speeding ahead with Wendy and slower walkers following behind (although still swiftly) with David.

“Do you want to walk with me?” David asks two small boys who queue up behind him after a break, eager to get going again. “Are you tough enough?” David makes a show of checking the boys’ calf muscles, nods approvingly, and off they go.

The only sign of human involvement on the Koppies is a nature hut in the middle of Melville Koppies Central, built to house an excavated Iron-Age smelting furnace. The furnace is the Koppies’ archeological treasure – one of the main reasons the nature reserve was established in the first place.

The furnace doesn’t look like much – a sort of large, hand-hewn clay pot, now preserved under glass.

But this furnace was a hugely important archeological discovery, proving that decedents of today’s Sotho-Tswana people were mining iron ore here centuries before white colonialists arrived to mine gold. The oldest furnace discovered on the Koppies dates back about 600 years.

It’s blazing hot by the time we cross from Koppies Central into Koppies East. The moving line of hikers gets bottlenecked as pokey children lag, prodded on by their parents. The grass is waist-high in some places, or neck-high for the little ones. Water supplies are dwindling.

One man holds up his battered sneaker, which has lost its sole. “Nikes,” he says, shaking his head with disdain.

This side of the Koppies, closest to downtown Joburg, has some of the best city skyline views. The long line of hikers zig-zags across the hills with the Hillbrow Tower in the background, clearly visible despite the late morning haze.

Despite the scattered signs of exhaustion, I hear very little whining and everyone still seems happy to be here.

I’m hot and tired myself, and hiking with 100 other people has its challenges. But as we loop around the edge of Melville Koppies East, back through Melville Koppies Central, and out the tiled gate to the Mark’s Park parking area, I’m sad the walk is over. I feel a sense of camaraderie with these 100 people – a different feeling than the one I get when I walk on the Koppies alone.

To learn more about the Melville Koppies, or to make a donation to FOMK, visit www.mk.org.za. 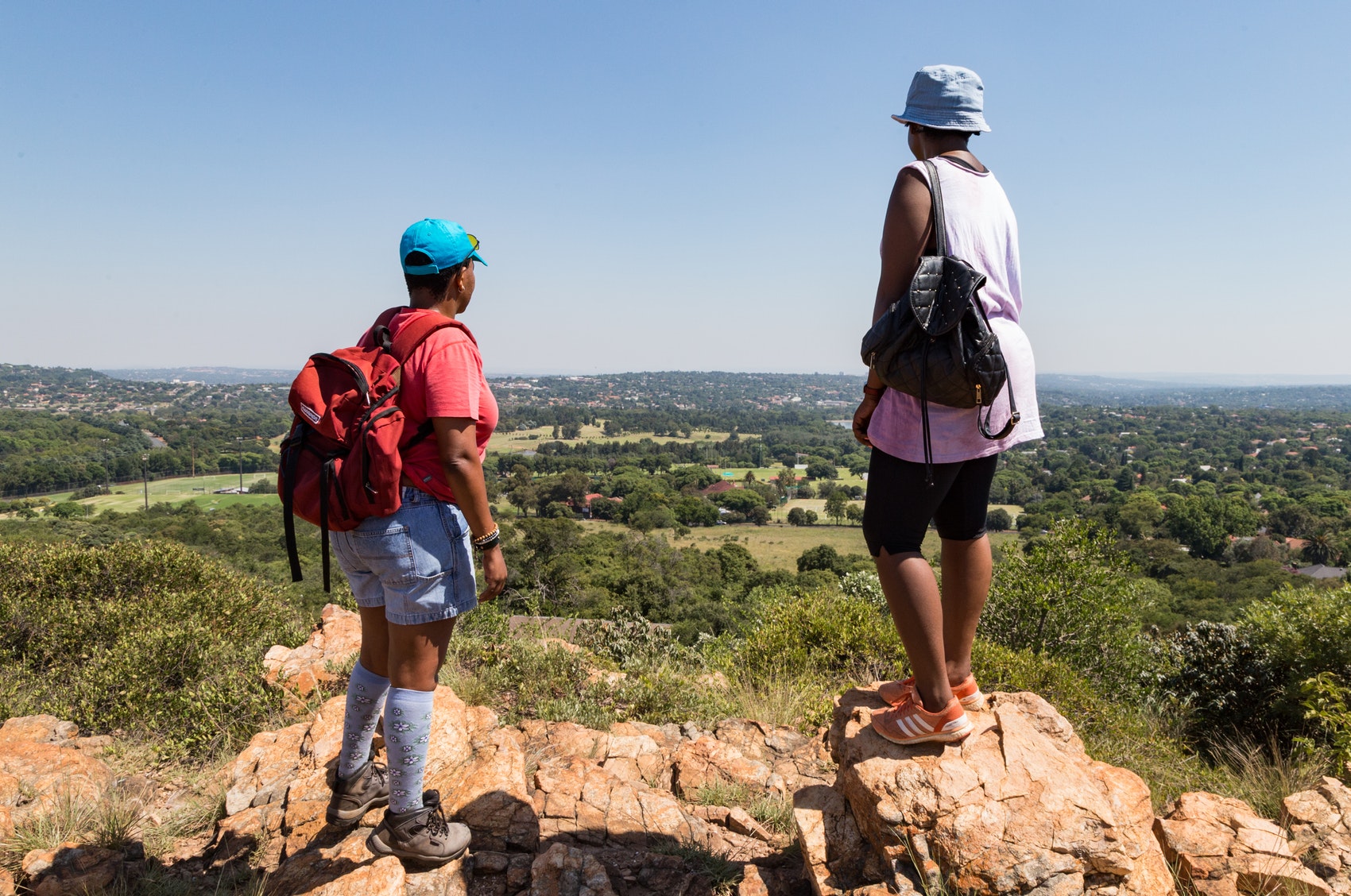 Words and images by: Heather Mason of 2Summers blog