Known as one of Joburg’s Art Deco icons and once (albeit fleetingly) one of Africa’s tallest buildings, the third Anstey’s building bears testimony to Johannesburg’s post-depression economic boom and the opulence that accompanied it. Architect Melinda Hardisty tells the story of how this building came to be.

Norman Anstey, one of Johannesburg’s former mayors, also ran a thriving department store, Norman Anstey’s and Co., in the early 1900s. When the high-end retailer outgrew its original inner-city premises, Anstey’s son, Hugh Anstey, who by that time was running the business, decided it was time for a new premises, and that one should be built to fit the purpose. The post-depression economic climate was favourable, and there was a general obsession with new building technologies and international style trends, especially those hailing from America. Both of these factors fuelled Johannesburg’s architectural development, and surely played a role in dictating the Art Deco style in which the third Anstey’s building was to be built.

The Art Deco style originated in France before World War One and became popular internationally in the 1920s. The style combined various modern design trends with fine craftsmanship and rich materials, comprising geometric, Cubist forms, the bright colours of Fauvism, and exotic motifs. With world travel being more readily accessible, design was heavily influenced by art and forms from China, India, ancient Egypt, Japan, and Maya art. In the 1930s, the style became more subdued and also embraced new materials like chrome plating, stainless steel, and plastic. New York City’s Chrysler Building, with its stepped façade, geometric patterns, and shiny materials, is the poster-child for the Art Deco architecture of that era.

The Architecture firm, Emley and Williamson, was commissioned to design an iconic building that would embody the luxury and glamour that Norman Anstey’s and Co. had come to be known for. The firm followed the trends of the time, both in design terms and in pushing the boundaries of new materials and striving for greater heights ̶ literally. Building of the third Anstey's building began in 1935, and took two years to complete.

With 20 storeys, and standing 55 metres high, the Anstey’s building became the first focal point on an otherwise uniform city skyline once construction was completed in 1937.

It was briefly the tallest building on the African continent, though this accolade was short-lived as designers and investors raced to build the tallest, most eye-catching structures around.

The reason behind Anstey’s iconic shape is its adherence to a bylaw-imposed rule that taller buildings had to step back at an angle of 59°. This bylaw was introduced in an attempt to allow light into the narrow grids that were formed as a result of the rapid increase in the number of high rise buildings in a space that was originally intended for a small, temporary city. 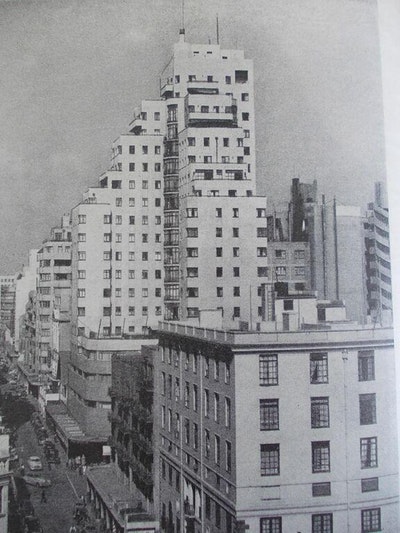 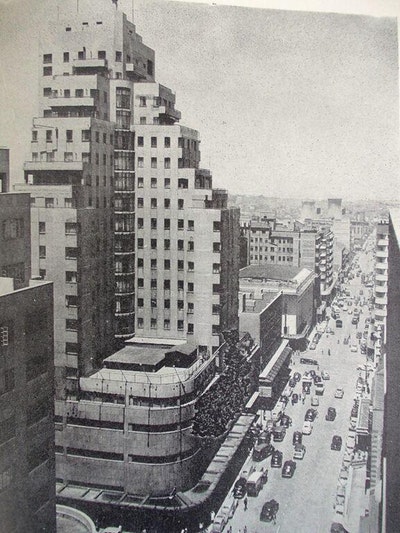 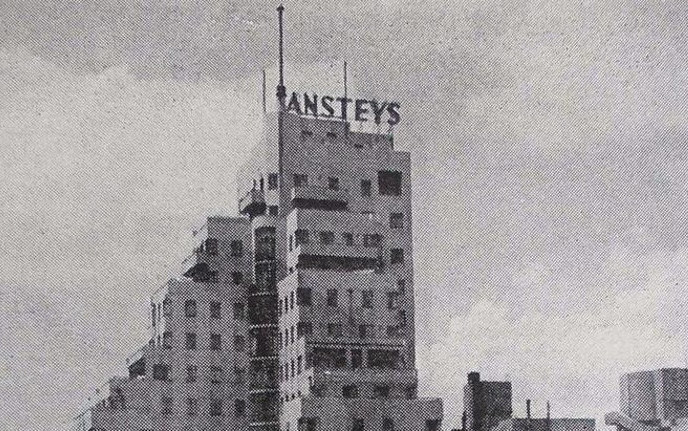 The Anstey's building sits on a four storey podium with a curved edge towards its street corner. These levels were originally occupied by Norman Anstey and Co. department store. The three upper levels have flat, stark façades with narrow horizontal bands of windows. The development of steel reinforced concrete allowed the main floors to be largely free of internal columns, creating open expanses for the shop.

The ground level originally had huge plate glass display windows facing the pavements, and the store was famous for its glamorous and elegant window dressing.

Norman Anstey and Co.'s main entrance even featured a state-of-the-art, freestanding, cylindrical glass display case that gave shoppers a three-hundred-and-sixty degree view of the establishment’s latest offerings as they entered the building.

It is above this podium – the residential floors – that the building’s distinct design takes shape. Apartments occupy two wings arranged at right angles to each other. Each wing is stepped into the iconic ziggurat style, with the upper levels being set back significantly from the street. The angled geometries and zigzag patterns were common themes within Art Deco design and show the influence of ancient Egyptian and Mayan structures. 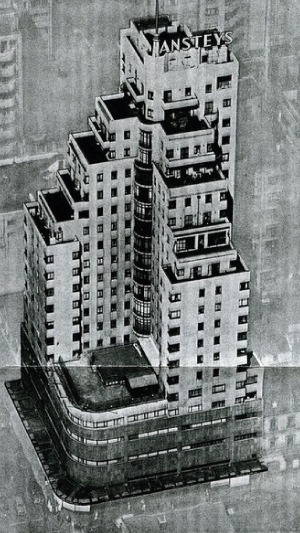 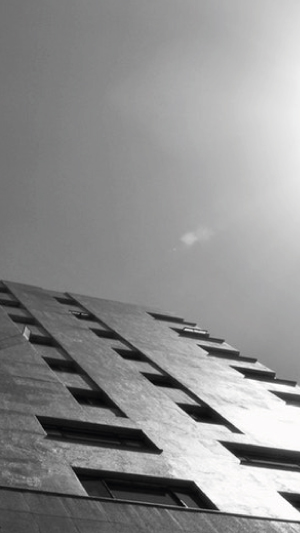 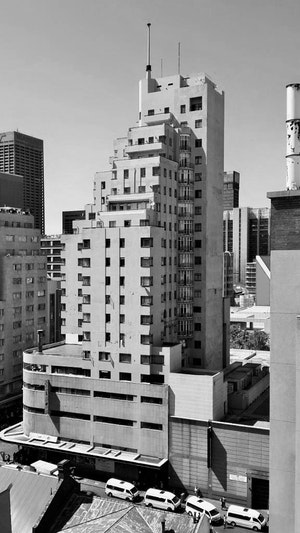 An increase in inner city commercial property prices in the late 1900s caused businesses to move out of the city centre to new cheaper, business nodes further away from town. As a result, the third Anstey’s building fell into neglect, and was proposed for demolition in 1989 to make way for development.

The building’s saving grace came in the form of the architect employed by the developers, who recognised the importance of the building and refused to sign the demolition documents. While most of the buildings around it were demolished, Anstey’s lived on.

New Housing Company (NEWHCO) took over the building and refurbishments began in 1994, under the watchful eye of architect, Denzil Hersch. He reinstated commercial functions on the podium floors (ground, through third) and started to refurbish the apartments above. Ultimately the residential units became sectional title units and were sold off to private owners. The building was declared a National Monument in June that year.

Today, the ground floor is occupied by a vibrant array of commercial tenants. A more recent series of renovations by architect Brian McKechnie, mostly completed just in time for the building’s 80th birthday in 2017, included the repainting of the camel coloured facades to the original grey. The paint was a custom order, now named ‘Anstey’s Grey’. The renovations also included the rejuvenation and restoration of various public areas such as the fabulous Art Deco ground floor lobby, with its decorative brass monkey artwork. 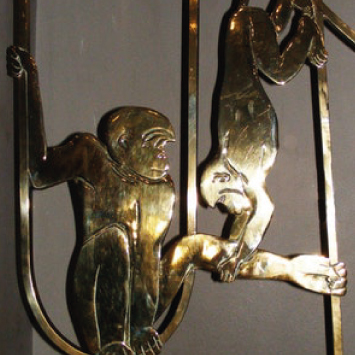 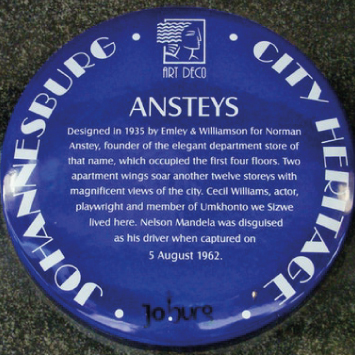 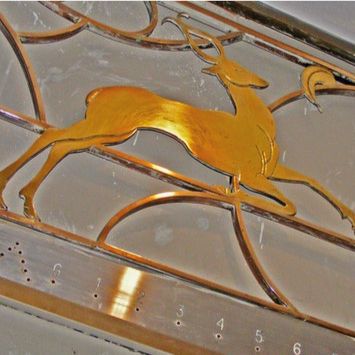 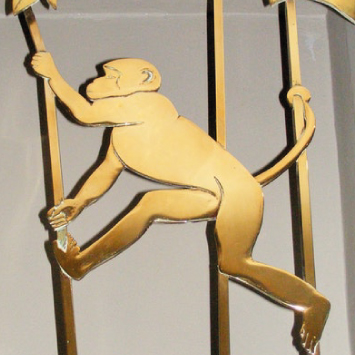 If you find yourself on the corner of Joubert Street and Jeppe Street (now Rahima Moosa Street), don’t forget to take a step back from the bustling street market stalls and look up. The majestic view will be well worth your time. If you’re curious about the access-restricted interior of the building, you can get a sneak peak of the building by watching local indie rock band Shortstraw’s music video for their single, Jetlag.

Editor's note: we're grateful to James Ball of the Heritage Portal who allowed us to use images of the Anstey's Building featured on their site.

Words and images by: Melinda Hardisty of www.urbanjozi.wordpress.com,
unless otherwise credited