An Afternoon At The Oriental Plaza

Heather Mason tells us how

Like every other legacy of apartheid, the Oriental Plaza makes absolutely no sense.

Opened in the early 1970s, the Plaza was built in Fordsburg for Indian shopkeepers who were forcibly removed from 14th Street in nearby Pageview. The apartheid government had slated Pageview, which was a racially mixed neighborhood, to become a whites-only area.

14th Street, once the most bustling, multicultural shopping corridor in the city, became a barren wasteland. It remains so today. The hundreds of traders who once worked and owned businesses on 14th Street were forced to move one kilometre southeast, to a chaotic, warren-like shopping centre designed to put them all out of business.

But the joke is on John Vorster. More than four decades later, the Oriental Plaza thrives.

I visited the Plaza on one of my first Joburg sightseeing outings, a few days after I moved here in 2010. I was enchanted from the moment I stepped inside. I love the haphazard arrangement of the shops and the clock tower in the courtyard, vaguely reminiscent of a mosque's minaret. I love the elaborately dressed mannequins and the scent of Indian street food. I love the way the light filters through the skylights, illuminating shop owners sitting on low stools in the corridors.

I love that there is always something interesting happening at the Plaza. And yet at the same time, nothing ever seems to change. Many of shops at the Plaza have been there, under the same ownership, since the centre opened 43 years ago.

AN AFTERNOON AT THE PLAZA

Visiting the Plaza is a great way to ease into exploring the Jozi CBD. It's on the edge of downtown where traffic tends to be relatively light, and is surrounded by a secure parking lot.

This offbeat pseudo-mall has all the convenience and shopping options of Sandton City, without any of the blandness.

Everyone has their thing that they go to the Plaza for. Some go for curtains; the Plaza is the cheapest, best place to have curtains custom-made. Others go for shoes, or spices, or cheap clothes, or kitchenware or tailoring. I mainly go for people-watching and samoosas.

There are endless combinations of ways to fill an afternoon at the Plaza, but here are a few of the spots that have become my favorites over years of exploring.

The Plaza is the size of a couple of city blocks and there are several different entrances, so it takes a while to get oriented. The outdoor courtyard on the northern side is a good place to start.

The courtyard is scattered with umbrellas, red wooden benches, and a collection of kiosks selling food, flowers, carpets, and mobile phone accessories. At the center of the courtyard is the clock tower, which still manages to look dignified despite the garish ads for Zee TV plastered to the sides.

During the festive season, a large Christmas tree stands in the middle of the courtyard. You might expect the tree to look out of place in a centre where virtually none of the shopkeepers are Christian. Strangely though, the Christmas tree fits in perfectly. It's the best time of year to shop at the Plaza. 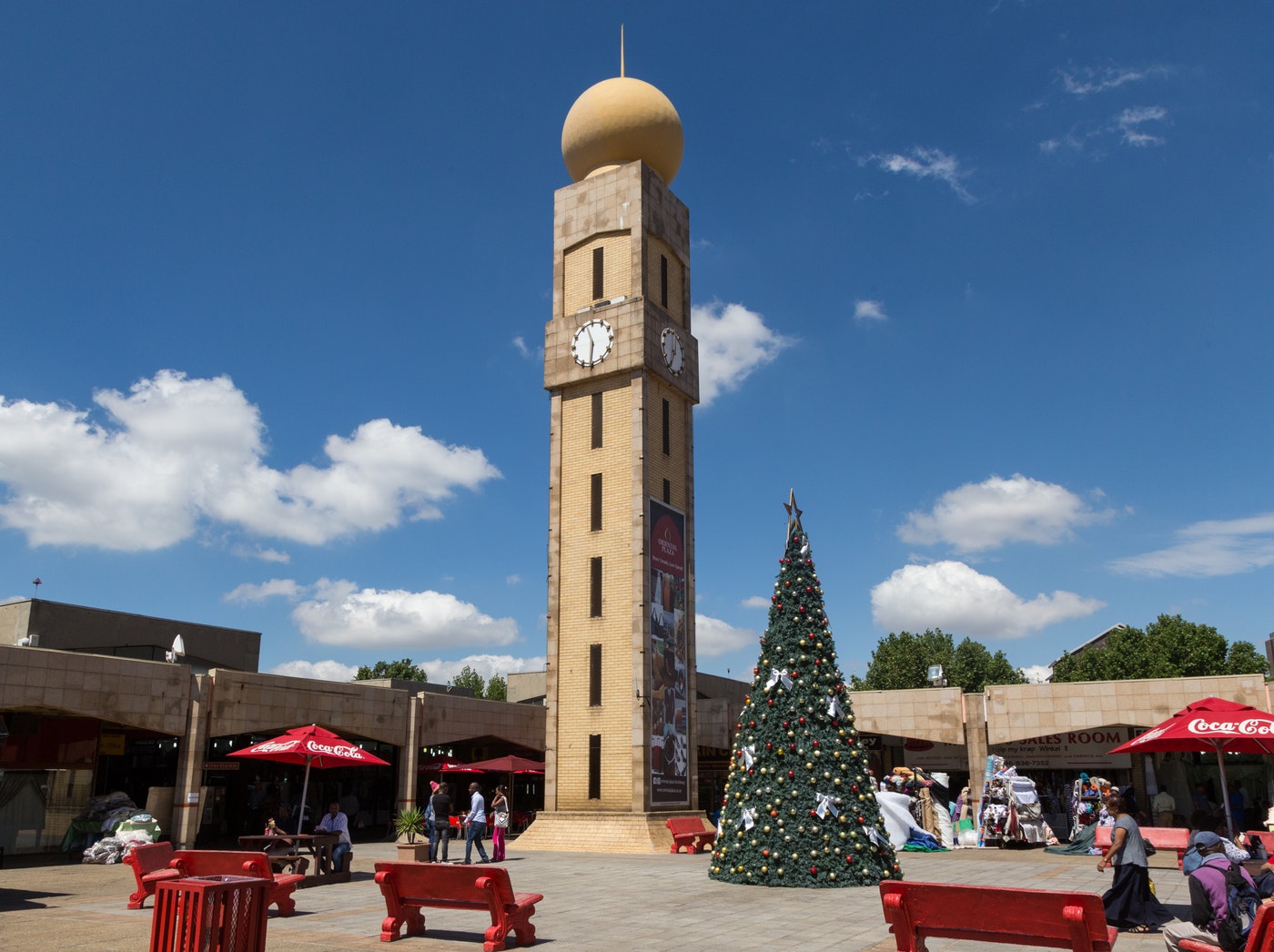 Through the courtyard, past the plastic flower vendor and inside, is the Grand Bazaar: a two-story, circular hall lined with clothing and fabric shops. You could spend an entire day exploring the shops in the Grand Bazaar, starting at the inner circle and fanning out concentrically.

There's a vendor selling cheap luggage on one side of the Grand Bazaar floor, and a little sunken area with those kiddie rides where toddlers can rock on a mechanical horse. Moosa's Sales Room, the biggest fabric shop in the Plaza, is on the Grand Bazaar's top floor.

There's a lot to look at in the Bazaar, but I usually just admire it briefly and walk straight through. Most of my favorites are on the other side.

When I arrive at the Plaza hungry, I make a beeline through the courtyard and the Grand Bazaar and go straight to World of Samoosas.

Nelson Mandela once ate at World of Samoosas and Zaheer will show you photos and the old guestbook to prove it.

Most of all I love the samoosas themselves, R4 each, served by the dozen in pink and white boxes with a plastic ramekin of bright red chutney. (My friend Kate keeps telling me the samoosas from the Golden Peacock, a restaurant on the other side of the Plaza, are better. But I have yet to test them - how can I go to the Plaza and not eat at World of Samoosas?)

World of Samoosas is most famous for its sweet coconut samoosas, which aren't served anywhere else. I'm personally a fan of the spinach and feta.

Find World Samoosas on the top floor of the Plaza at the far southern corner, on the opposite end from the courtyard. 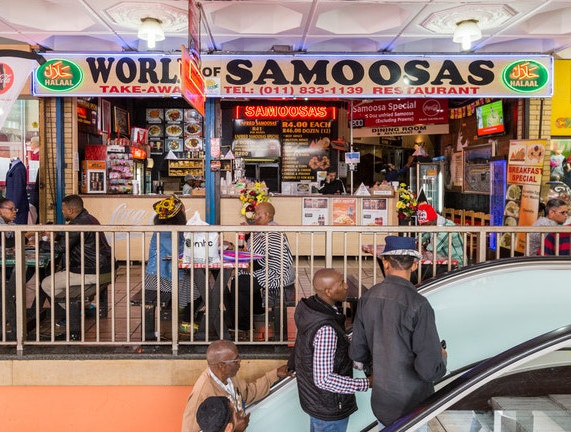 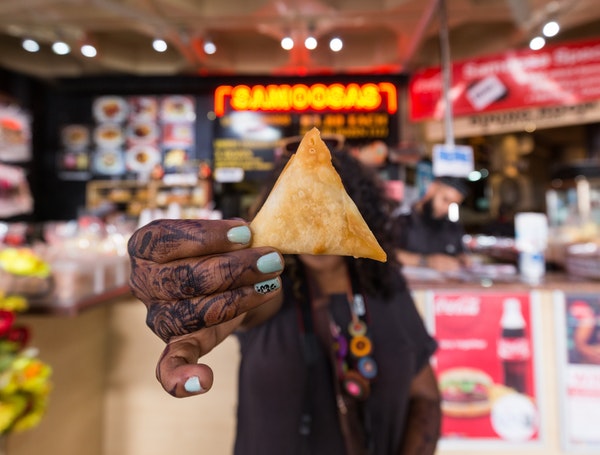 Nilesh's shoe repair shop is directly down the escalator from World of Samoosas. I go there to get my shoes repaired - also my backpacks, camera bags, and pretty much anything else that can be fixed with leather, thread, or glue. I also go just to chat with Nilesh.

Nilesh always has something to talk about - his upcoming plans to run the Comrades, his daughter's love of drawing, or the pros and cons of the most recent iPhone camera. I love watching his staff members repairing shoes. Fixing old stuff is so much better than buying new. 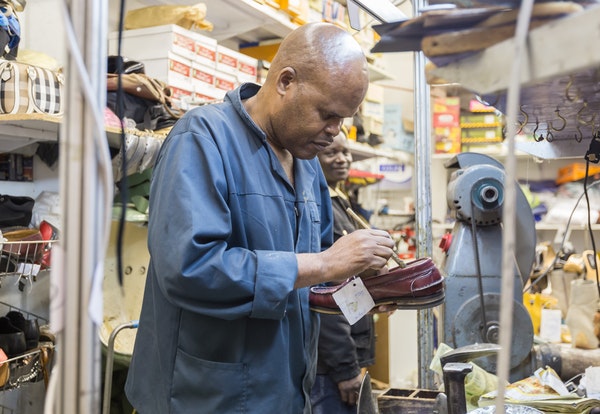 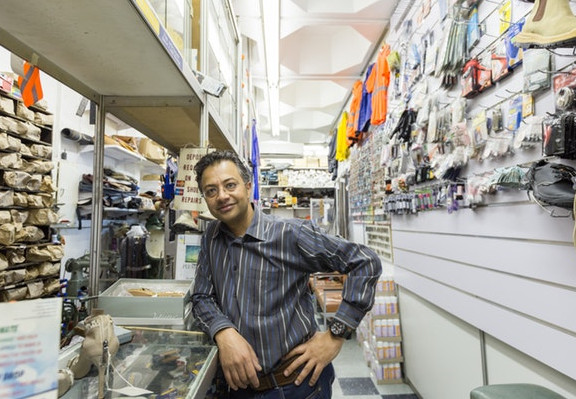 Outside Nilesh's shoe repair, on the ground floor of the Plaza near the south entrance, is a Johannesburg Heritage plaque describing the historical significance of Red Square. In the 1940s and 50s, long before the Oriental Plaza was ever conceived, this area was an open square where political activists from the Communist Party and the ANC would meet. The Defiance Campaign was launched on this spot in 1952.

Today, the blue plaque stands prominently in the middle of the Plaza corridor and customers flow past it on their way in and out. Some stop to look at the plaque, glancing up to read the signs describing the history of Red Square and the Defiance Campaign. Others just hurry by.

I rarely cook. But that doesn't stop me from poking around Akhalwaya's Masala Centre and its photogenic display of Indian spices. Akhalwaya's is the place to go for chilli powder, curry spice, "Kentucky chicken spice" (whatever that is), and a uniquely South African fiery spice called "Father-in-Law Masala". There's a "Mother-in-Law" version, too.

My friend Fiver favors the mustard-colored potato spice, which sits in a big bowl at the corner of the counter and is scooped into packets upon request. I simply take photos, knowing my best-laid plans for making curry always lose out to ordering takeaway from the Indian restaurant up the street.

Akhalwaya's is on the ground floor of the Plaza, on the right-hand side a few shops down from Red Square. 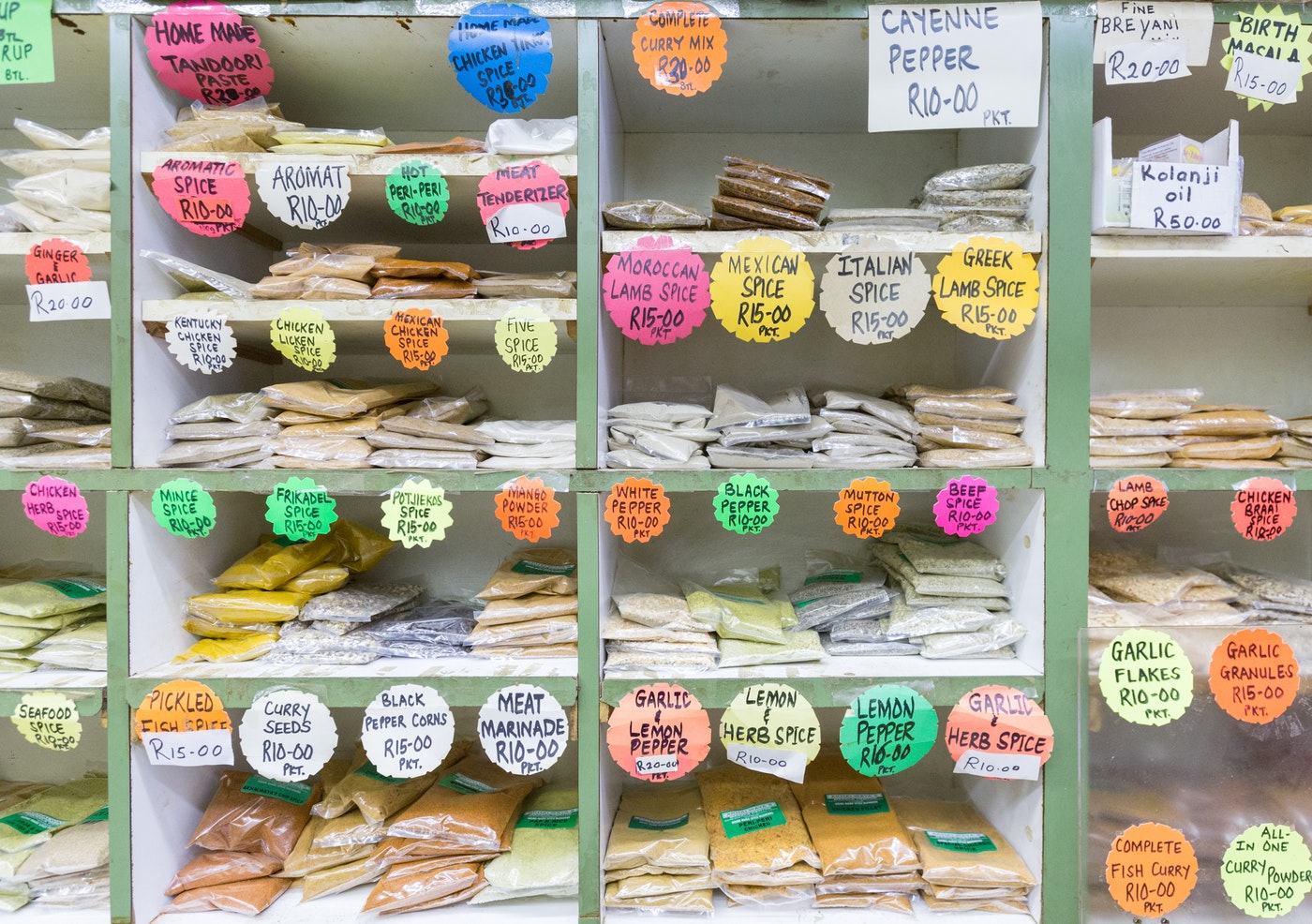 Hardcore dressmakers and haberdashery enthusiasts shop at Moosa's. I prefer to browse African prints at Style Fabrics - a tiny shop in a corner of the Plaza's upper floor, close to the Grand Bazaar.

Style Fabrics is much smaller than Moosa's, but I like the intimacy and there is still more than enough South African shweshwe and Dutch wax print to choose from. The staff is friendly and happy to answer questions about each fabric's origin. 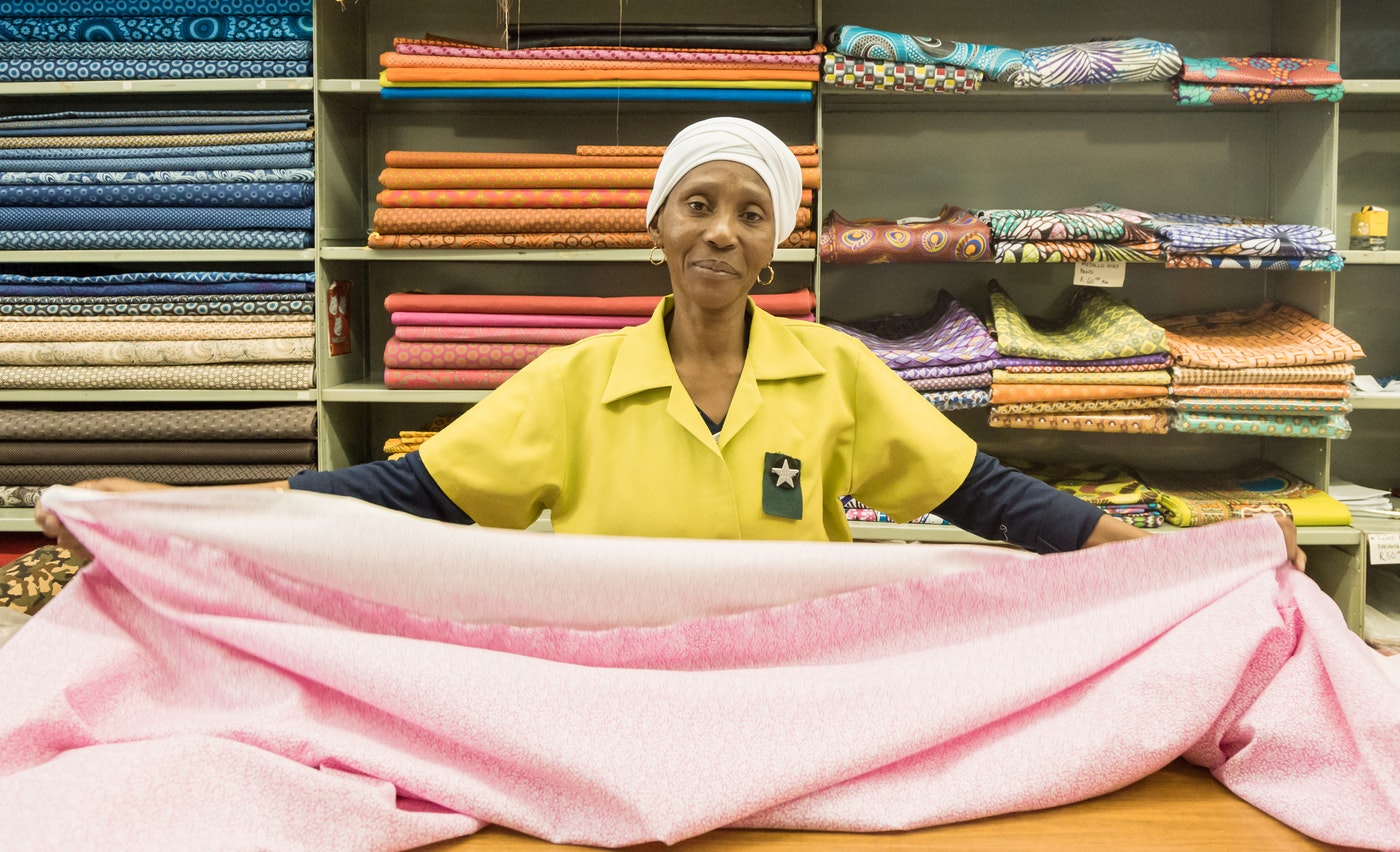 I save the Rajashree Boutique for last. Rajashree was the first shop I ever visited in the Plaza, and it's still my favorite place to buy scarves and long cotton skirts that are perfect for traveling in Africa.

Rajashree is tricky to find; it's behind the courtyard, in a hidden back hallway surrounded by curtain-makers. Each year the merchandise from Rajashree seems to spill further and further out into the hallway - riotous-colored clothing draped four or five layers deep on overburdened mannequins. The inside of the shop is bursting at the seams.

The shop's walls are lined with shelving from floor to ceiling - shelves also sprout from the floor and merchandise hangs from the ceiling in between - filled with scarves, pillow covers, dresses, muumuus, and random pieces of fabric from all over the world. I buy four or five scarves at a time and negotiate a discount.

The owner of Rajashree Boutique, Mr. K. Budhia, often spots me outside the shop with my camera and encourages me to go take pictures at his other shop, apparently just down the hall. But I've never gone - I can't imagine it's as good as this one.

And anyway, at this point I'm usually Plaza'd out. I pick up my bag of scarves and head for the parking lot. 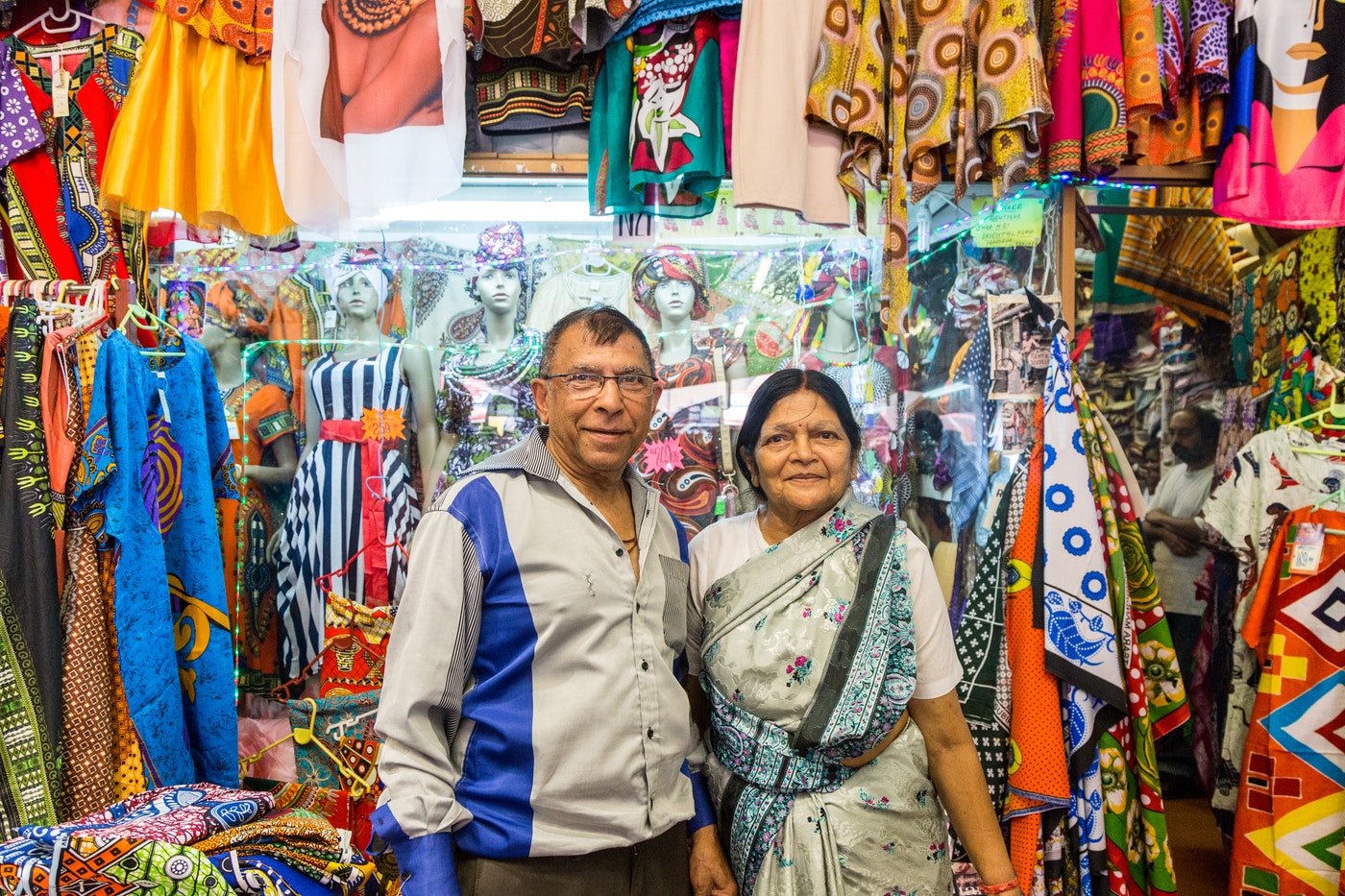 TIPS FOR VISITING THE ORIENTAL PLAZA

Many of the Plaza's shops, including World of Samoosas, close while shopkeepers attend Friday prayers - on Friday afternoons between about 1:00 and 2:00 p.m. (sometimes a bit earlier or later).

The Plaza's parking lot gets full on Saturdays. Arrive early.

Although the Plaza is very safe, the crowded corridors are popular with pickpockets. Keep watch on your belongings.

The Oriental Plaza is at 38 Lilian Ngoyi Street, Fordsburg. 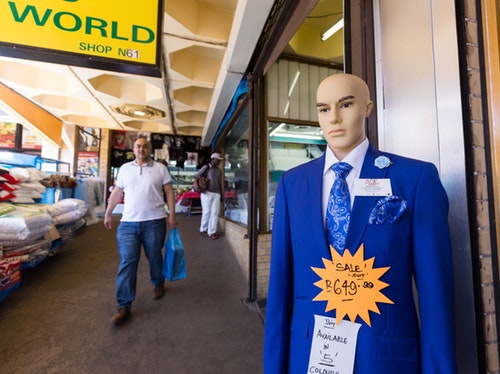 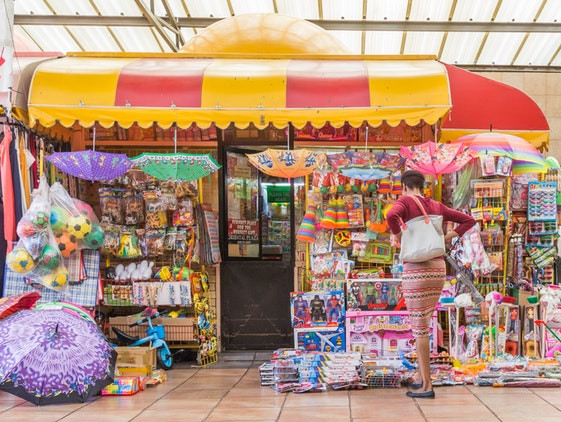 Words and images by:  Heather Mason of 2Summers blog